What do you do when you split the cost of a 3-D printer with your roommate and then have to figure out who gets to keep it when you stop living together? One college student came up with a solution that made everyone happy. He made a new one using the old one to make parts.

When faced with the impending “who gets to keep the printer” dilemma Instructables DIYer Pat L (AKA: redhatman) and his roommate had, the duo agreed that one would buyout the other with the agreement that it could still be used for the remainder of their cohabitation together. Pat spent the next three months and about $600 to build his very own 3-D printer using parts that he made using the existing 3-D printer. 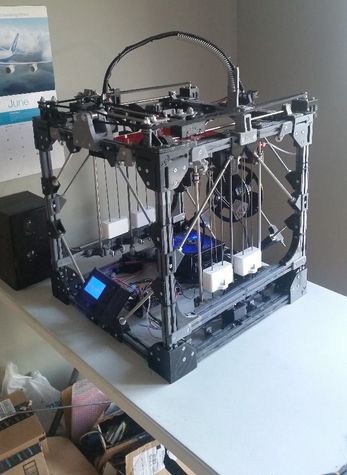 You could almost consider this to be a self-replicating 3-D printer project. Many of the parts were made using a Prusa i2 printer. Although, there were also parts purchased and gathered through other non-3-D printing means.

The project is detailed in 16 complex steps of which you may not be willing to delve into. However, the whole build is evidence of what 3-D printers can do, as well as what DIYers can create. It wont be long until entire 3-D printers will be built with just the push of a button.

It reminds me of the “Benderama” episode of Futurama, when Bender uses the Professor’s matter duplicator to make copies of himself that go on to create duplicates of themselves, and so on. Hopefully, self-replicating 3-D printers won’t consume all matter on Earth in order to continue the duplication process.