Toshiba is updating its entire line of laptops with dedicated hardware to support the Microsoft Cortana digital assistant software included in Windows 10. That means there’s a dedicated Cortana key on the keyboard and dual-array microphones to allow the company’s laptops to pick up your questions and voice commands even in a noisy room.

While most of Toshiba’s new laptops have 14, 15.6 or 17 inch screens, the company is also updating one of its smaller convertibles. Toshiba representatives tell me a new version of the Toshiba Satellite Radius 11 will be available exclusively at Best Buy starting June 21st. 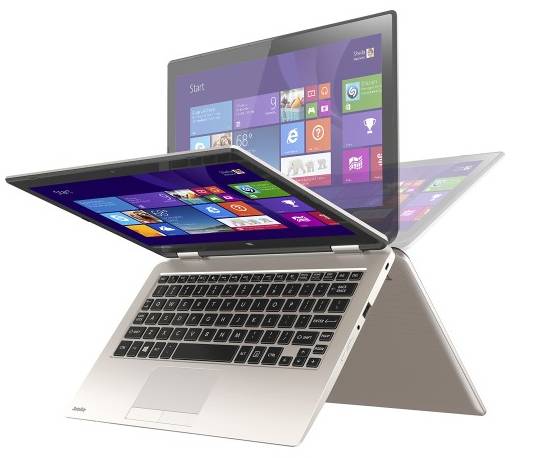 The new model will look a lot like its predecessor, which means it’s a notebook with an 11.6 inch, 1366 x 768 pixel display and a 360 degree hinge that lets you fold the display backward until the notebook becomes a tablet.

But the new model will have dual-array microphones and the F1 key will also be a Cortana key. Basically the company is getting rid of the question mark/help button that used to show up on the F1 key and replacing it with a Cortana button.

That’s about it for the updates. The new model will have the same Pentium N3540 Bay Trail processor that was an option on older Satellite Radius 11 models.

While the new model will ship starting June 21st with Windows 8.1 software, it’s eligible for a free update to Windows 10 starting July 29th.