Want to record music, interviews, or podcasts on your smartphone? You can use the built-in mic and a sound recording app. But most phones have mediocre microphones, at best.

You could use a notebook or desktop computer instead and hook up a high-quality mic. But you’ll need to connect the mic to a cable, maybe hook up a mic stand, and fire up your recording software.

Mikme is designed to make it easier to record high-quality audio on a computer, phone or tablet. It’s a standalone microphone and recorder which you can use to capture audio and then send it to your devices. Or you can use it as a Bluetooth mic for Skype or other software.

The developers are raising money for the Mikme through crowdfunding site Indiegogo. 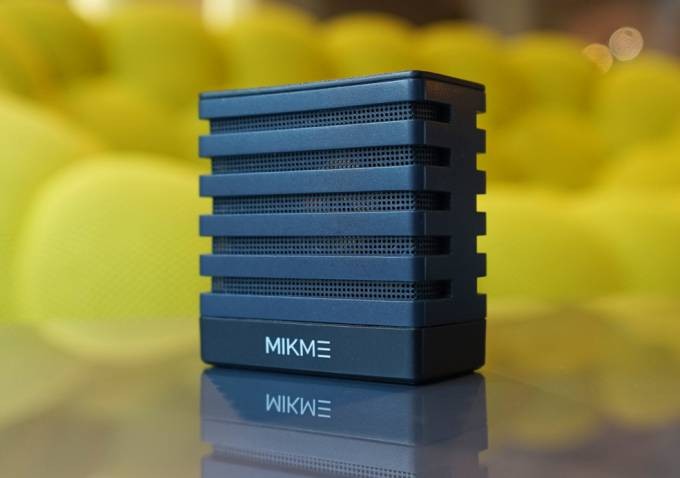 Early birds can request a Mikme for a pledge of $169. After the first 250 units are reserved, you’ll have to pledge $249 or more to get one. That’s still $50 lower than the expected retail price though.

Several of the key leaders of the project had worked at mic and headphone company AKG. They hope to ship the first Mikme units to backers of the campaign in November.

While the price is kind of high for folks looking for a simple solution for making Skype calls, professional microphones can easily sell for hundreds or even thousands of dollars. It’s a bit early to say how the audio quality of the Mikme compares to those high-end microphones, but according to a few samples posted by the developers it can certainly capture better sound than most of the mics built into smartphones and tablets.

What makes Mikme special though, isn’t just the mic hardware (which includes a 1 inch gold plated condensor mic with a cardiod pattern) or the built-in audio recorder (with 8GB of storage, support for 24-bit, 96 kHz audio and WAV or MP4 formats).

What’s really unusual are the wireless capabilities: the Mikme is designed to pair with mobile devices running iOS 8 or later or Android 5.0 or later so you can record audio in real-time and then use Mikme’s mobile apps to browse, play, and remix your audio using touch-friendly controls.

You can also hook up the mic to a PC, Mac, or iOS or Android device using a micro USB cable to treat it like any other USB mic. There’s a 3.5mm audio output jack as well, which lets you monitor sound while you’re recording. You can also use the audio jack to connect the Mikme to a GoPro or any other device that supports mic input.

If you’re just looking for an affordable device for recording audio on the go, I’d probably recommend the Sony PCM-M10. You can pick up this handheld audio recorder for around $200 and it features surprisingly great microphones, support for 24/96 audio recording, and better hardware controls than you’d get out of a simpler device like the Mikme.

But the Mikme looks like an interesting option for folks looking for a simple one-button recording solution that can also be used as a USB or wireless mic. There are plenty of Bluetooth speakers designed to make up for the fact that your smartphone probably has lousy built-in speakers. This is one of the first high-quality Bluetooth mic projects I’ve seen.

One reply on “Mikme is a Bluetooth mic & recorder for phone, tablet, PC (crowdfunding)”