Microsoft’s HoloLens holographic computer is designed to let you superimpose digital graphics on the real world. It’s a wearable device powered by Windows 10, and Microsoft started showing off Hololens hardware and software in January.

Recently the company started showing how Hololens will work as a media player that can turn any wall into a big screen TV and as a wearable computer for Windows 10 apps.

Now the company is showing how Hololens will work with games… or more specifically, with Minecraft. 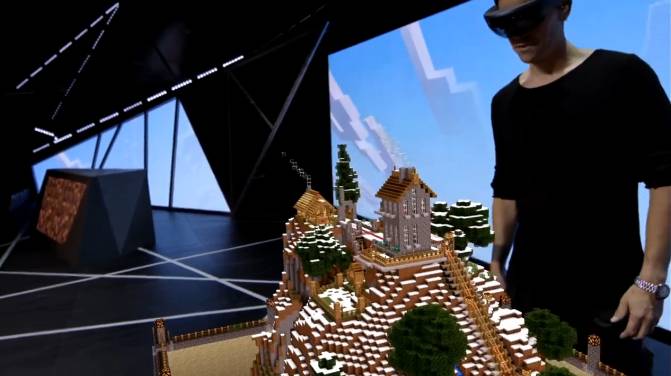 During the company’s E3 press conference, Microsoft showed off a new version of Minecraft designed to work with HoloLens.

You can project a 2-dimensional version of Minecraft and play the game as if you were staring at a laptop or desktop display. But you can also switch to a 3D user interface that puts the virtual world’s you’re building right in front of you.

Microsoft showed how you can zoom into virtual worlds, view them from different angles, and generally get a more immersive experience than would be possible using a normal PC display.

There’s no word on when the new version of Minecraft will be available… but since HoloLens isn’t expected to hit the streets for a while, don’t expect to see the Minecraft app this summer.