Sony’s flagship smartphone for 2015 features a 5.2 inch full HD display, 2GB of RAM, a 20.7MP camera and Android 5.0 Lollipop software. That all sounds pretty good, but there may be one major problem with Sony Xperia Z3+. The phone has a Qualcomm Snapdragon 810 processor, and there’s mounting evidence that this chip has a heat problem.

There’ve been a number of reports indicating that phones with the processor have a tendency to suffer from performance issues when the processor gets too hot.

The latest example? Using certain features of the Sony Xperia Z3+ for a few seconds can cause the app to crash. 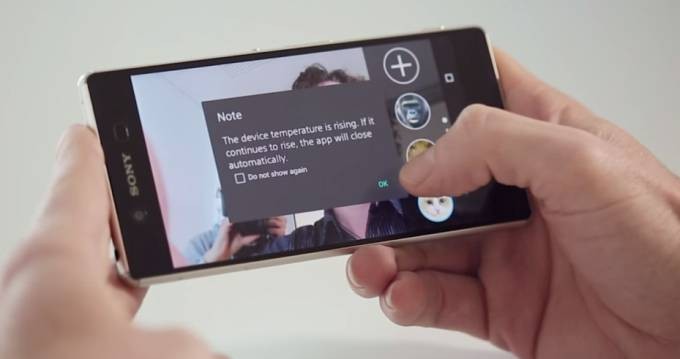 The folks at Android Pit noticed the problem when they started testing a review unit, but they’ve confirmed with Sony that this is known issue affecting phones that are shipping to customers. Sony plans to release a software update to address the issue in the future, but it’s a pretty obvious demonstration that the Snapdragon 810 processor can run hot.

For now, you can still use the camera to shoot 1080p video or take basic photos. But if you try to use the camera’s augmented reality mode or shoot 4K video, you’ll see a message after a few seconds letting you know that the Camera will turn off temporarily in order to help your phone cool down.

At the conclusion of a somewhat cheeky video, Andrroid Pit’s Kris Carlon drops the phone into a glass of water… but that raises an interesting point: unlike most smartphones with the Snapdragon 810 chip, the Sony Xperia Z3+ features a waterproof design.

Maybe someone should try to build a liquid-cooled smartphone case. Of course, the insides of the phone aren’t waterproof, liquid-cooling would be able to keep the outside of the phone cool, but might not do much to keep the chip itself from getting too hot.