Twenty years ago, you’d have to look to science fiction to find watches that let futuristic space travelers and cartoonish detectives talk on their wrists. But even in comic books and movies it would have been difficult to imagine running a full home computer’s operating system on something so small.

Fast-forward to the present and, not only are we using our wrist-based computers to talk to one another, but we can also run operating systems that are more powerful than what was available in the in the mid-90s. 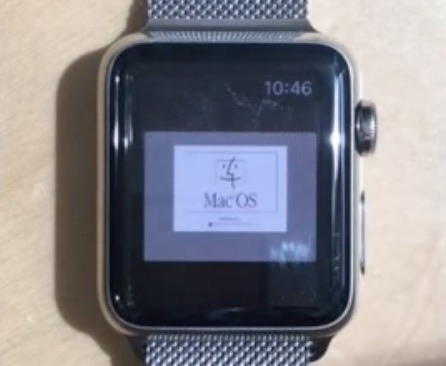 These sorts of hacks may be silly (it’s not exactly easy to use a classic desktop OS on a 1.5 inch screen), but it’s still impressive to see an OS that was originally designed for a desktop computer running on a tiny watch.

Version 7.5.5 of Mac OS was first released in the fall of 1996. At the time, an operating system that powerful required a large home computer with huge tower. Today, Lee’s demonstration on Apple Watch not only shows the operating system running on something smaller than a matchbox, but also reminds us of just how far things have come in two decades.

Technology advancement marches on… and it is no longer difficult to imagine the sci-fi future that we read about in books.