Wearable shipments have been on the rise for two full years, according to research firm IDC. On the other hand, overall shipments are still small enough that China’s Xiaomi was able to quickly come from out of nowhere to become the second-largest player in the wearable market.

In the first quarter of 2015, Xiaomi reportedly shipped 2.8 million fitness trackers, giving the company just under a 25 percent market share. Fitbit is still the market leader, with 3.9 million units shipped for about 34 percent of the overall market share.

But fitness trackers are all Fitbit sells, while Xiaomi also offers phones, tablets, TV boxes, and other products. That could be part of the reason for Xiaomi’s success: the company already has a fan base for its other products which it can leverage to help sell products in new categories, such as wearables.

A bigger factor may be price: Xiaomi’s Mi Band sells for just $15, making it one of the most affordable fitness trackers on the market. Fitbit, by comparison, offers a range of fitness trackers priced between $60 and $250.

Interestingly, IDC isn’t just tracking shipments of fitness and activity trackers in this report though. The company is looking at all wearables, including smarwatches… but only one smartwatch maker made the top 5 list.

Samsung took the number 4 spot, with about 600,000 smartwatch shipments. 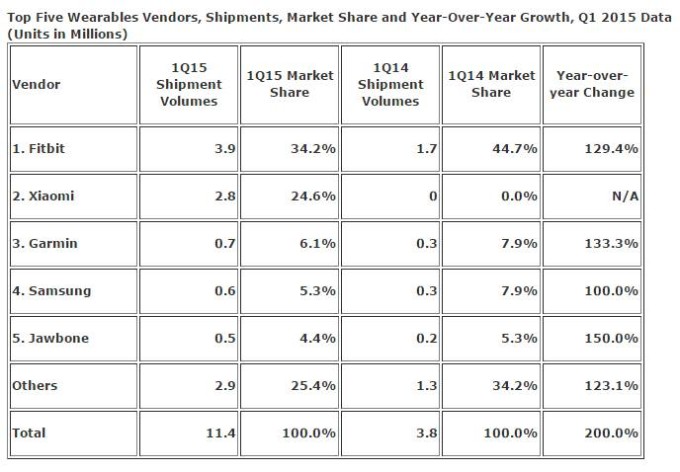 It’s worth noting that these figures all come from January through March, 2015. That means Apple Watch shipments aren’t included. But it also means that Xiaomi wasn’t yet shipping its Mi Band fitness trackers to the United States or Europe. The company only recently started selling products in those regions.

IDC’s reports for the second and third quarters of 2015 will probably be much more interesting than the Q1 report.

3 replies on “IDC: Xiaomi is second only to Fitbit in wearable shipments”