It also has a sturdier keyboard base than last year’s model, making it easier to use the new HP Pavilion x2 like a laptop without worrying that it’ll fall over. The new keyboard is nice and solid, has a wide trackpad, and firmly attaches to the tablet with magnets that are strong enough to hold the computer together even when you lift it by the tablet portion. 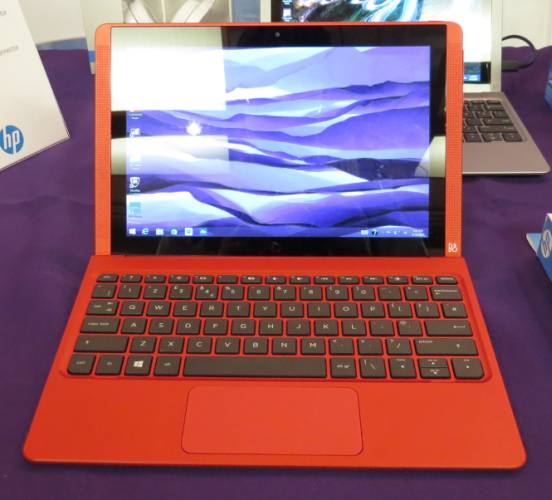 The new tablet dock isn’t just sturdier than the keyboard cover that came with the original Pavilion x2 10, it also has a hinge that’s designed to keep the system from falling over. When using the computer as a laptop you can open the screen to a 135 degree angle and it won’t tip over. It also won’t open any wider, so there’s no risk of it tipping over unless you push at the screen with a bit of force.

Weighing about 1.3 pounds, the tablet is a little heavier than the 1.2 pound keyboard. But overall the system feels pretty well balanced. The system is also reversible: you can flip the tablet around so it’s facing away from the keyboard if you want to use it in display or kiosk mode.

It’s clearly made of plastic, but the tablet feels pretty sturdy. It comes in three color options, red, white, and silver/grey.

The $300 features an Intel Atom Bay Trail processor, 2GB of RAM, and 32GB of storage. HP will also offer a model with 64GB of storage for $350. Later this year the company is expected to launch a version with an Intel Atom Cherry Trail processor, but despite showing off a prototype of that model at the Computex trade show in early June, the Cherry Trail versio isn’t ready to go yet.

The tablet features a 10 inch, 1280 x 800 pixel IPS display, a full-sized USB port, a microSD card slot, and a USB Type C connector which you can use to charge the tablet or connect peripherals including storage devices, displays, or anything else that supports a USB C connection.

Most of the ports are on the right side of the tablet, along with a Windows key and volume button. On top is a power button, and on the left side there’s a headset jack.