Google is rolling out an update to its online music streaming service that brings free, ad-supported internet radio stations to Google Play Music.

If you want access to on-demand streaming of any song or album available on the service you’ll still need to pay $10 per month for a subscription. But you can now access curated playlists or create your own station based on an artist or song. 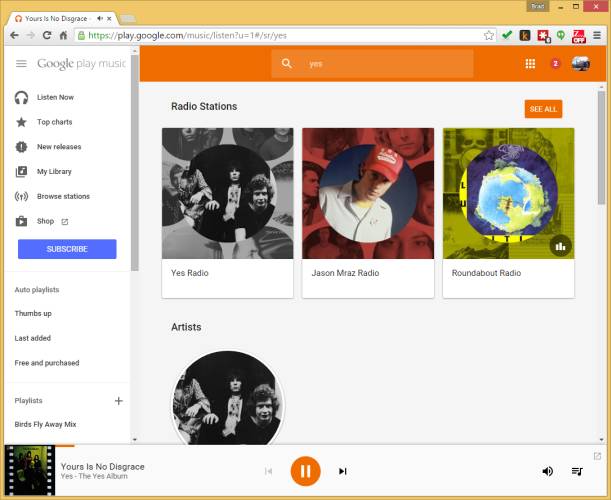 Last year Google acquired Songza, a company that specialized in offering curated playlists. Later Google brought that feature to Google Play Music subscribers. Now it’s available to folks using the free version of Play Music as well… although you’ll have to listen to an occasional audio ad if you’re using the free tier.

Songza is still available as a standalone, ad-free service (for now). You can still use it to stream music based on genre, mood, or other wacky criteria (like “Your Life is a Romantic Comedy,” “Cryin’ Time,” or “Rattle of Doom”). But the new Google Play Music radio service has a feature that Songza does not: search for an artist or song and you can hit the play button to start playing a station based on that selection. You won’t necessarily hear the song you chose, but you’ll hear something similar.

The Verge notes that the free service doesn’t allow you to rewind tracks, only lets you skip up to 6 tracks per hour, and there’s no way to see what songs are coming up next.

All told, the new free service isn’t quite the same as Spotify’s ad-supported service which lets you choose individual songs or albums to stream. It’s probably more comparable to Pandora’s internet radio service. But the timing is interesting: Google is rolling out this major update to Play Music a week Apple Music goes live on June 30th.

The new radio feature is already available in the US for folks who visit play.google.com/music using a web browser. It’ll be added to the Play Music apps for Android and iOS later this week.

Google Play Music also continues to let users upload up to 50,000 of their own songs to Google’s servers for free and listen on any supported device including phones, tablets, Android TV boxes, or computers (through a web browser).