Want to take Firefox OS for a spin, but don’t want to buy one of the low-power phones that come with the operating system or take the big step of replacing the OS on your existing phone with an unstable build of Boot to Gecko (the open source version of Firefox OS)?

Now there’s another option: b2gdroid is a free app that lets you get the Firefox OS experience on an Android phone. 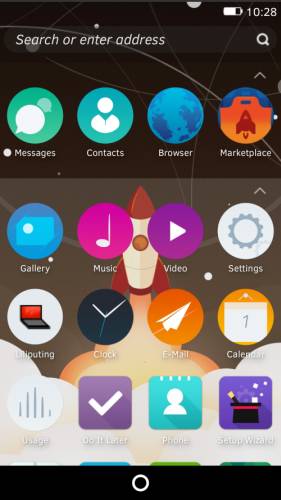 Here’s the idea: install b2gdroid on your phone, hit the home button, and choose “Firefox OS” rather than your usual app launcher.

This loads an app launcher that looks just like the Firefox operating system that powers phones like the ZTE Open C. But what you get is more than just a simple replacement for your home screen and app launcher.

The first thing you’ll see is a lock screen which shows the time, date, and a lock button that you can swipe left to open the camera or swipe right to unlock.

Once you unlock the device, you’ll see a home screen with big buttons for all of the apps on your device, as well as some custom Firefox apps and settings. There’s also a search bar at the top of the screen, which you can use to search the web or open websites: the home screen and the entire Firefox OS experience is basically one big web browser, after all.

Near the top of the screen you’ll also find shortcuts to important features including messages, contacts, browser, and Marketplace (which is Mozilla’s app store for third-party apps developed using HTML5 and other web technologies).

You can download and install Marketplace apps just as if you were using a Firefox OS device.

Overall, b2gdroid gives you a good idea of what Firefox OS looks like and how it works. But as of June 9th, 2015 it’s a rather sluggish and unstable. It crashes frequently, takes a long time to load, and it runs slowly even on devices with reasonably fast processors.

B2gdroid is also optimized for devices with ARM-based processors, although I was able to run it on an Asus Zenfone 2 with an Intel Atom Moorefield processor. The app crashed every time I tried to load it on a Nexus 5 running the Google Android M developer preview.