Chip makers Allwinner and Qualcomm have announced a bizarre-sounding agreement designed to help Qualcomm get its chips into more low-cost tablets. 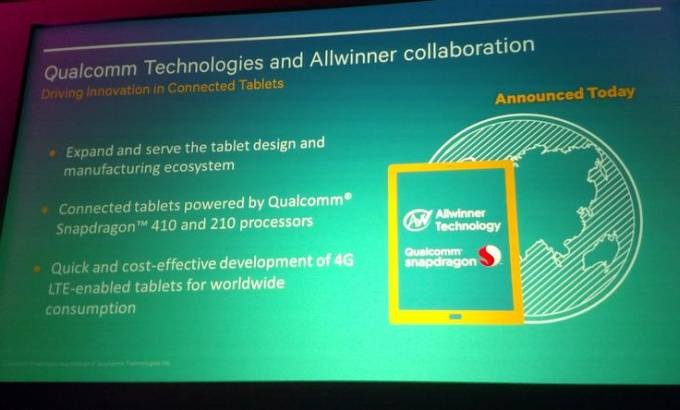 Allwinner is a Chinese fabless semiconductor company that designs its own chips, which are often used in cheap tablets produced in China. But for the most part those tablets are WiFi-only.

Qualcomm, meanwhile, is an American chip maker that already has a series of low-cost chips with integrated support for 4G LTE, including the Snapdragon 210 and Snapdragon 410 processors. The chips also support for dual SIM cards and Qualcomm Quick Charge technology.

While Qualcomm chips are widely used by smartphone and tablet makers that sell their products in the US and Europe, the company’s chips aren’t as popular with budget tablet makers in China, who often opt for processors from Allwinner, Rockchip, and MediaTek.

By partnering with Allwinner, Qualcomm could leverage that company’s connections to convince Chinese device makers to use its chips. Allwinner gets a chance to offer device makers a solution for 4G LTE-capable tablets without having to design its own 4G chips in-house.

In other words, while the agreement might seem odd at first glance, it could be a way for each company to tap into the strengths of its partner to fill in gaps in its own product lineup or distribution network.

Update: Charbax from ARMDevices caught up with Allwinner at Computex, and got a little more information about how Qualcomm and the Chinese chip maker will work together.

via @Anshel Sag and CIO