Acer is reportedly working on a new Chromebook which will be the company’s first model to feature a convertible design. Accordingf to WinFuture, the Acer C738T Chromebook is a laptop with an 11.6 inch touchscreen display and a 360 degree hinge. Push the screen back all the way and you can hold the computer like a tablet.

The Acer C738T Chromebook could also be one of the first models to ship with an Intel Braswell chip. 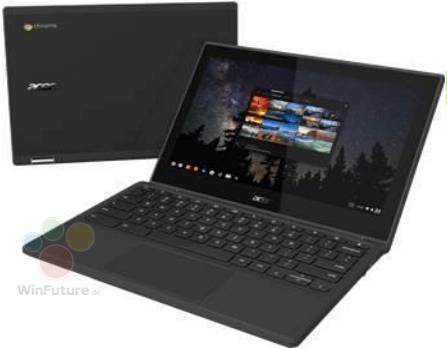 Braswell is basically the slightly more powerful version of the Intel Atom Cherry Trail tips used in tablets and low-power laptops or convertibles.

WinFuture reports the Chromebook also features 4GB of RAM, 16GB of eMMC storage, dual-band WiFi, Bluetooth, a 720p camera, and a 1366 x 768 pixel IPS display. It has HDMI output, an SD card reader, a USB 3.0 port, and a USB 2.0 port and the convertible laptop weighs about 3.1 pounds.

Acer wouldn’t be the first company to release a Chromebook with a 2-in-1 design. The upcoming Asus Chromebook Flip also has a touchscreen display and a 360 degree hinge, and Lenovo’s ThinkPad Yoga 11e Chromebook has been bending over backward for use in tablet mode since last year.

12 replies on “Acer C738T convertible Chromebook with Intel Braswell on the way?”