Xiaomi may have shipped more smartphones in China than any company other than Apple in the first quarter of 2015, but the Chinese electronics giant isn’t exactly a household name outside of its home country yet.

So far Xiaomi’s phones, tablets, and other products are only available in a handful of markets including India, Singapore, and Indonesia (although, to be fair, those are huge markets).

Now Xiaomi is taking a baby step toward launching its products in more mature markets including the US and Europe. Starting Monday, May 18th the company will offer a limited quantity of select products in those markets through its online store… but don’t expect to see phones, tablets, or smart TVs in the Mi Store yet. 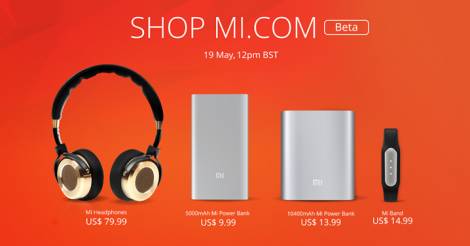 Xiaomi is running a series of flash sales as part of its beta launch of the web store for US, UK, France, and Germany.

Products on offer will include:

Note that Xiaomi’s products will ship from China. The company will attempt to deliver products within 7 work days, but there’s no free shipping offered and import taxes will be applied in regions where such taxes apply.

Xiaomi had announced plans to sell some non-phone products in the US and Europe earlier this year. The company announced the upcoming flash sales via Facebook.

So what’s stopping Xiaomi from selling its popular Mi smartphones in these markets? Well first the company would need to make sure they have the correct hardware to support wireless networks in the US and Europe. Then they’d need to get regulatory approval to sell their devices. And, at least in the US, they’d need to decide whether to work with mobile operators to offer the phones bundled with data plans (which is how US customers typically get their phones) or to risk trying to sell contract-free, unlocked phones for full price (something which a handful of companies have done in the US, but which usually results in those companies grabbing a fairly small market share).

10 replies on “Xiaomi’s Mi Store opens in the US, UK, France, and Germany May 18th (without phones)”