Intel is adding a few new low-power models to its NUC line of tiny desktop computers. The new models feature 6 watt processors based on Intel Braswell architecture and price tags starting at around $140 or less for a barebones model.

Update: Amazon is now selling the system for about $129. 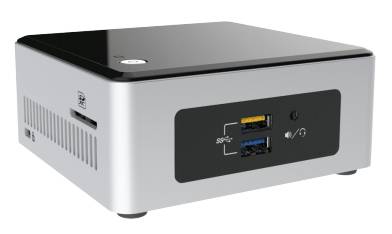 Both processors are 14nm, 64-bit chips with support for up to 8GB of RAM. They’re low power processors based on the same architecture as the latest Intel Atom chips, but they consume a bit more power and should offer better performance.

Intel’s NUC5CPYH mini PC should be available soon for around $140 or less, and a few stores including MacMall, ShopBLT, and PC Connection are already taking orders.

MacMall is also taking orders for the NUC5PPYH for about $180.

Both NUC mini PC kits feature are basically small desktop computers that measure about 4″ x 4″ and which come with a motherboard, processor, and other core features, but no memory, storage or operating system.

Under the hood there’s support for a 2.5 inch hard drive or SSD, support for a laptop-sized DDR3L memory stick, an M.2 card slot with an 802.11ac WiFi + Bluetooth 4.0 wireless module, and a small fan to keep things cool (sorry, this is not a fanless system).

These won’t be the only mini PCs with Intel Braswell chips launching this summer. the ASRock Beebox line of mini-desktops are also small desktop computers with support for Intel’s latest low-power chips.