Google’s ATAP team has unveiled a device that looks like an ordinary microSD card. But Project Vault is actually a tiny computer that can add security features to just about any phone, tablet, or computer, allowing you to protect important files and communication. 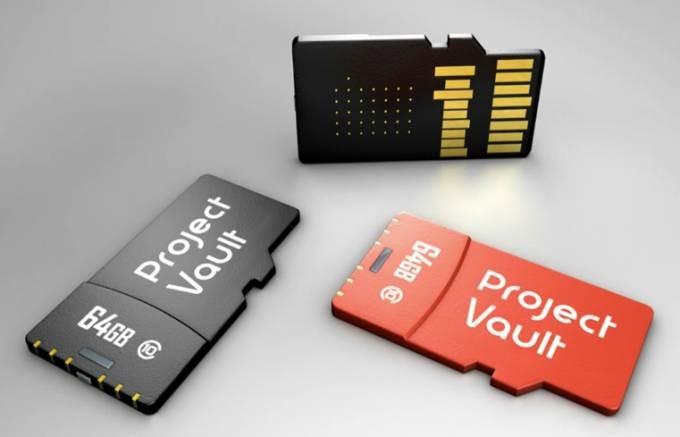 Well, almost any of those devices… it’s a little funny that Google built Project Vault into a microSD cars, when the Google nexus line of phones and tablets are kind of notorious for not having microSD card slots. Maybe that’ll change in the future though… Android M does have enhanced support for removable storage, allowing you to “adopt” a microSD card and treat it like local storage.

The Project Vault prototype includes a low-power ARM processor, an NFC chip, 4GB of storage, and a real-time operating system. Google has already begun testing the system with 500 units that the company is using within the company, and the goal is to launch Project Vault initially as an enterprise product which may eventually be made available to individuals.

Since the system is basically a microSD card, you can slide it into any device that has a microSD port… and it’ll show up as a removable drive.

But once it’s connected, it can also encrypt your data. In a demo at Google I/O, Google showed two phones with Project Vault cards sending messages to one another over a remote server. The phones were able to view the messages with no problems, but all the remote chat server saw was cypher text.

That’s because Project Vault handles all of the hashing, signing, and other cryptographic operations. Not even the operating system on your phone has access to your private key or other data.

In fact, your phone, tablet, or PC won’t even know Project Vault is there: everything happens on the Vault itself, which allows it to work with just about any operating system including Android, Windows, Linux, or other platforms.

Google has already released the source for both the Project Vault software and for developer kit hardware. Even the OpenRISC1200 processor for the dev kit is open source.