Want to share a link to a website with someone? You could copy and paste it into an email or chat window. Or you could use the new Google Tone extension for the Chrome web browser to share the link with any PC within earshot. 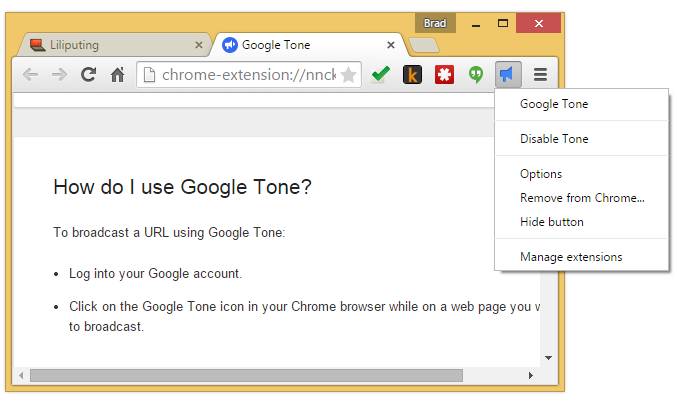 Here’s how it works: when Google Tone is active, it uses your computer’s microphone and speakers. Want to share a link? The browser extension converts the web address into a tone that it can play over your speakers. When a nearby PC (with the Google Tone extension enabled) hears that audio, it can open the website.

This isn’t the first time Google has used audio as a way to transmit data. When the company added support for guest mode to its Chromecast media streamer last year, the company came up with an interesting way for people to pair their phones with a Chromecast without entering a WiFi password. The Chromecast uses your TV speakers to emit a high-pitched sound which it sends to a phone running the Chromecast app.

When you’re using Chromecast’s guest function though, there’s a good chance you won’t hear the high-pitched sound unless you have stellar hearing. Google Tone, on the other hand, will emit a loud series of beeps. It’s not the most discrete way to share a website.

Google says Google Tone might not work in noisy environments or places with poor internet connections. And it won’t work if the computers are too far apart. Note that Google will also temporarily store the URL you’re sharing on its servers, so if you’re not keen on sharing any more data with Google than necessary, you might want to just share links the old fashioned way: by writing them down on a scrap of paper… or sending them via Snapchat or something.

Google’s calling the Google Tone extension an experimental Chrome extension, and the first version was “built in an afternoon for fun,” so while it’s been spruced up a bit since then, it doesn’t sound like the company really cares if you use the tool or not. But it’s an interesting application of audio technology… it not necessarily a useful one.