With a few dedicated components available from the TinyCircuits’ online shop, you too can play Space Invaders on a thumbnail sized screen. 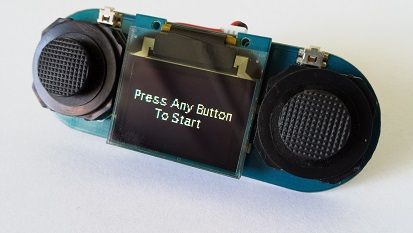 All you have to do is snap the pieces together and connect the USB TinyShield to a micro USB cable and then connect that to a power source. Once fully charged, you can then connect the device to your computer to program the TinyDuino. TinyCircuits has a number of game emulators, plus there is a blog where more games are being added regularly. There is even a TinyCase in the works. Hopefully, they will provide a PDF to print it out on your own 3-D printer.

So far, games include a Mario style mini game where players rack up points for killing Goombas, a Flappy Bird clone (that game is hard enough on a smartphone sized screen), and an Asteroids clone. Apparently, there is a racing game in the works.

While this is a do-it-yourself project, it isn’t exactly inexpensive. All of the parts combined will cost a total of about $88. However, it would be pretty cool to have the smallest console game player ever to show off to your friends.

3 replies on “Build the tiniest gamepad ever”