Microsoft is splitting its suite of Office apps for Windows in two: there’s Office for Desktop and Office Universal. The next version of the desktop suite will be Office 2016, which will be the latest version of the company’s long-running office software with a new design and new features specifically aimed at power users.

Microsoft released a preview of Office Universal for Windows 10 tablets, notebooks and desktops earlier this year. Later this month, the company will release the first preview for phones. 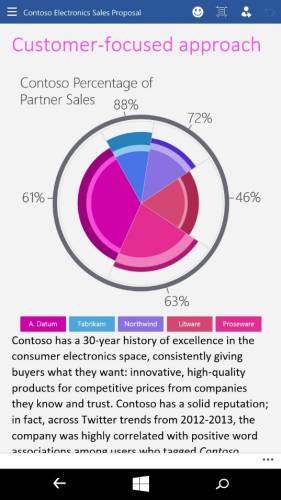 The company says Office Universal are optimized for touch and pen input rather than keyboard and mouse usage. The phone version looks a lot like the tablet version… but the user interface is tweaked for smaller screens.

Microsoft says you should be able to hold a phone in one hand while making some edits using just your thumb. If the apps look familiar, that’s because they’re quite similar to the software Microsoft already offers for iOS and Android.

Wondering how much Office Universal for Windows 10 will cost? Nothing. The apps are expected to be offered for free with phones and small tablets running Windows 10.

Office apps have been included in Windows Phone devices since before Microsoft called its mobile operating Windows Phone. But the versions that will be available for Windows 10 will basically be the same apps that are available for larger devices including tablets and notebooks. It just won’t necessarily be identical to the software that runs on notebook and desktop computers.