I was lucky enough to see LucasFilm’s newest droid in person over the weekend at Star Wars Celebration VII. The thing that stood out for me when watching BB-8 roll around on stage was just how cute the little guy was. I immediately wanted one of my own.

It turns out that BB-8 was designed by the same company that created Sphero, the spherical shaped toy that is controlled by an app on your Android or iOS device. 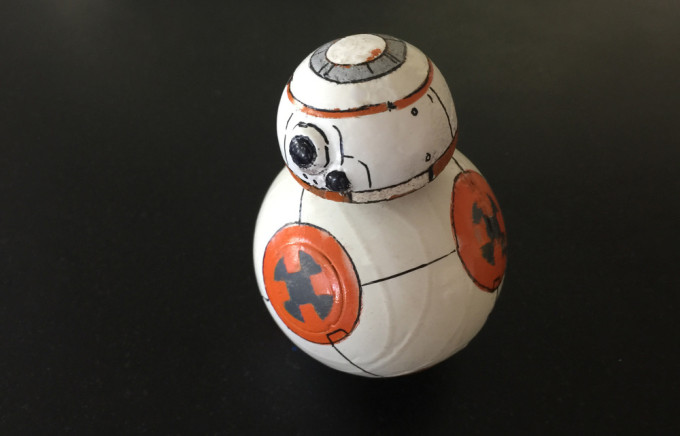 Industrial Design student at Brigham Young University Christian Poulsen created a mini BB-8 in just one day using a hacked Sphero 1.0. He split the spherical gadget in half using a hacksaw and added a 3/4-inch neodymium magnet ring to the shock absorber post inside. Then, he super glued his Sphero back together.

Creating BB-8’s half-dome head was the hardest part. Poulsen used the graphic design software Rhino to map out the design of BB-8’s head so the proportions were correct. He then used a CNC router to mill the dome out of polyurethane foam. He added the droid’s lens details using wood spackle.

For the paint job, Poulsen used a laser cutter and some tape, along with plastidip for the base coat. The plastidip was used in place of traditional spray paint because it is more opaque and blocks out the flashing light that Sphero produces when moving.

After finishing the paint job, Poulsen embedded a 1.375 neodymium magnet disc to the bottom of BB-8’s dome head. A felt pad was added to the magnet to allow it to slide easily across the sphere.

Using the Sphero app, Poulsen was able to move the little guy around. Because the gadget is top-heavy, this mini BB-8 actually looks like the real thing with the forward-leaning dome and everything.

That is all you need to create your own BB-8 droid. I know that Star Wars fans are all about creating unique versions of characters from the canon. I can’t wait to see what other types of spherical droids are produced by DIYers.

Of course, if you aren’t particularly handy with a hacksaw and CNC router, you can always wait until the official BB-8 toy launches later this year.

6 replies on “Make your own BB-8 droid from ‘Star Wars: The Force Awakens’ with Sphero”