Jide’s Remix Ultra Tablet is an 11.6 inch tablet with an NVIDIA Tegra 4 processor, a full HD display, and a few special features including a keyboard cover, a built-in kickstand, and a magnetic charger that snaps into place.

But the most unusual thing about the tablet is probably it’s operating system: Remix OS is a custom version of Google Android which includes a taskbar and support for running many apps in either full-screen or phone modes. You can fit multiple apps on the screen in phone mode.

Want to try Remix OS, but don’t want to pledge $349 on Kickstarter to get your own Remix Ultra Tablet? No problem. Jide has opened up a new pledge level: For $1 you can get early access to a custom ROM that should work with Nexus 9 and Nexus 10 tablets. 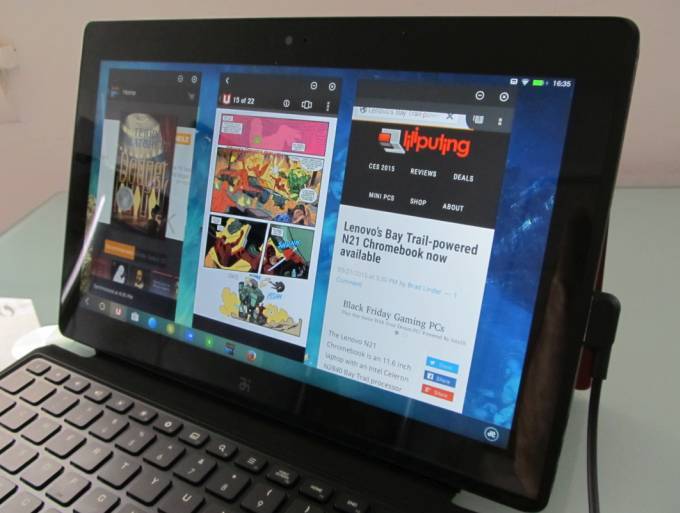 Note that Jide will provide guidelines for flashing the ROM on Nexus tablets. There’s no support for other devices (although there’s also nothing stopping folks who know what they’re doing from porting the ROM to run on other devices… if they’re willing to take the risk).

Jide also notes that while it will offer some support to backers of the Kickstarter campaign as they attempt to flash the ROM, the company takes no responsibility if you lose data or run into other trouble. So it’s probably a good idea to backup your data before getting started.

Already donated to the Kickstarter campaign? Anyone who’s already pledged at a higher level will also get access to the ROM.

Jide says it’ll release the Remix OS ROM to backers of its crowdfunding campaign in May.

The move makes sense for a company that’s trying to grow a community around its software and hardware platforms — Jide raised a lot of attention for the project by offering a limited number of tablets as rewards at the $39 and $199 pledge levels. But now that the cheap tablet rewards are all accounted for, it’s probably a good idea to offer potential backers a cheaper option than a $349 tablet.