Now Intel is bringing RealSense to even smaller devices: CEO Brian Krzanich showed off a 6 inch smartphone prototype with a RealSense camera at an Intel Developer Forum event in China. 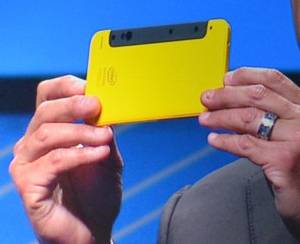 Intel says not only is the new camera small enough to fit into a compact device like a smartphone (Intel says it’s about 50 percent smaller than earlier versions), but it’s also a longer-range camera.

It’s possible that we could eventually see some features that had previously only been available in laptop and desktop computers come to mobile phones, such as support for 3D gesture controls.