Facebook has launched a new Android app that could replace your phone dialer with something a bit more… well, Facebooky.

It’s called Hello, and it’s available for download from the Google Play Store. The app is designed to use data from the social network to give you information about people who are calling — or to let you easily block unwanted calls. 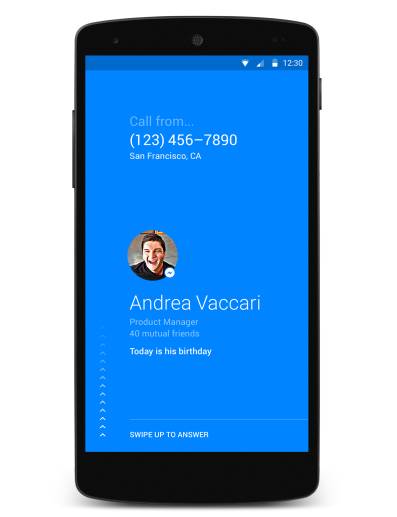 Here’s the idea. When someone calls your number, Hello will show information about the caller even if you don’t have their number in your phone… but only if it’s someone who’s already shared their details with you via Facebook.

Want to make a phone call? The app lets you search for people or businesses by name and start a phone call with a tap.

Don’t want to get calls from a number anymore? Just choose the option to block a call from that contact… or choose to block calls from all commonly blocked numbers. Calls from those numbers will go straight to voicemail without causing your phone to ring.

If Hello has a killer feature, it’s probably that last one. Google’s phone dialer for Android already provides detailed information about your contacts and provides caller ID for many businesses that aren’t in your contact list. But if you want to block a number, that can be tricky.

Facebook not only makes it easy to block individual numbers, but it can also leverage data from millions of users to figure out which calls are likely coming from telemarketers, scammers, or other folks you might not want to talk to… you know, assuming some of those millions of people actually decide to use Hello on their Android Phones.

Hello is a product of Facebook Creative Labs, and it’s currently available for testing — so it’s not clear if Facebook plans to add new features, take away features, or drop support for the app in the future.

3 replies on “Facebook Hello for Android is a dialer, caller ID, and call blocker”