The MediaTek Helio X20 is expected to be one of the first 10-core mobile processors when the chip launches later this year.

We first heard about the upcoming processor from Taiwanese chip maker MediaTek about a week ago. Now a few more details are emerging, giving us an idea of what to expect from the many-core chip. 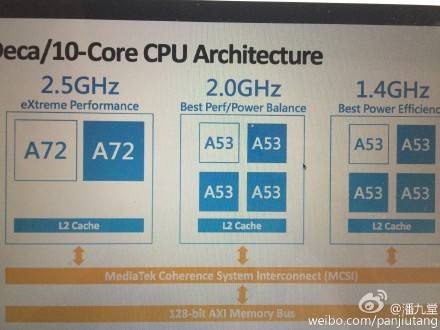 According to slides shared at Chinese social networking site Weibo, the chip will feature:

All of those processor cores are based on ARMv8 64-bit architecture, but the fastest chips are based on ARM’s latest designs which are said to offer up to 3.5 times the performance of an ARM Cortex-A15 processor while using up to 75 percent less power.

The Cortex-A53 cores are still pretty speedy, but they offer less performance and consume less power. Like most ARM-based chips with four or more processors, the Helio X20 will use only as many cores as needed for a certain task. The lower-power cores can handle day-to-day tasks with the higher-performance components kicking into action only when they’re needed. This helps mobile devices balance battery life and performance.

We’ll have to wait until the MediaTek Helio X20 (also known as the MTK6797) chip is released in the second half of 2015 to know whether this is all just a marketing gimmick or if ten cores are really better than eight (or four, for that matter). But MediaTek claims the new chip will score over 70,000 in the AntTuTu benchmark, while the company’s Helio X10 chip cores closer to 50,000.