So how much will these PC/game consoles cost? That depends on what kind of hardware you want.

The Steam website has listings for about 15 of the first Steam Machines and they’re priced between $460 and $5000. 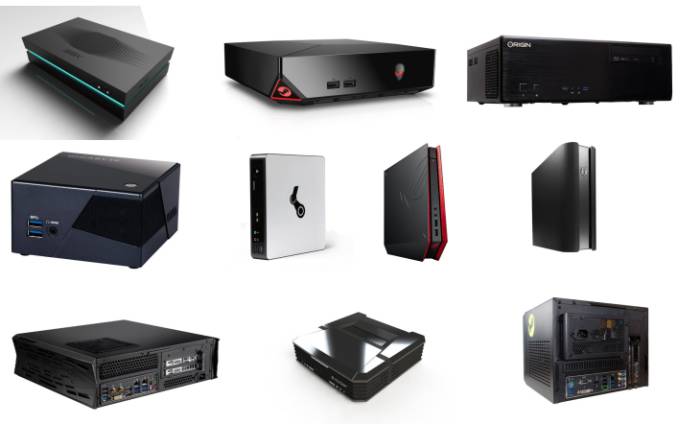 The idea of a Steam Machine is that it’s a PC designed for the living room. Stick one next to your big screen TV and you can use the Steam user interface to navigate your games and media, use the Steam Store to manage games, and use a Steam Controller (or another keyboard, mouse, or game controller) to play PC games.

Sure, you could also just buy a traditional game console like an Xbox, PlayStation, or Wii U, but the companies behind those boxes tend to release new hardware just two or three times per decade which means that the hardware can often feel kind of dated by the time it’s released.

When you buy a gaming PC, on the other hand, you can opt for the latest hardware… or upgrade an older device with more memory or storage, a faster processor, or other new hardware.

While many games don’t need bleeding edge hardware, some can certainly benefit from it… and it looks like gamers will have a choice of buying an entry-level Steam Machine for under $500 like the Alienware Steam Machine or iBuyPower SBX or spend thousands of dollars on a premium model like the Falcon Northwest Tiki or Origin Omega.

Most Steam Machines have some sort of NVIDIA or AMD graphics cards (or at least Intel Iris Pro integrated graphics), but high-end systems might have premium features including configurations with up to 16GB of RAM, up to 14TB of storage, liquid-cooled cases, and graphics cards that cost as much as the entire computer for some of the cheaper models.

Most models have relatively compact designs (by traditional PC standards), with certain models like the Zotac Steam Machines SN970 or Gigabyte BRIX Pro sporting cases that don’t take up much more space than a stack of DVDs. Others are big enough to support multiple drive bays, graphics cards, and other components.

All told, there are only a few things all the Steam Machines seem to have in common: they’re all basically small computers designed to look decent in your living room and designed to run Valve’s game-centric operating system.

They’re not the only option for folks looking to bring PC games into the living room though. NVIDIA’s new $199 Shield game console may run Google Android, but one of its key selling points is support for NVIDIA’s GameStream and GRID services. GameStream lets you stream games to the little box from a Windows PC connected to your home network, while the GRID subscription service will let you stream PC games from NVIDIA’s cloud servers.

Razer’s $100 Forge TV game console is also an Android TV box with support for game streaming. It’ll use Razer’s own service for streaming games from a PC on your home network.

Both of those devices are expected to ship before Steam Machines become available this fall. But neither will be able to truly run PC games the way a Steam Machine can.