I live in a house that was built in 1925, which means I have very few electrical outlets. In one room, there is only a single wall plug. It also means that wall plugs are a hot commodity around here. The last thing I want to do is hog up those sockets with a USB plug adapter.

The SnapPower Charger might be one of the simplest solutions to the problem of USB wall plug hogging. It is a specially designed outlet cover plate that keeps your sockets freed up, while still providing a USB port that you can plug directly into. 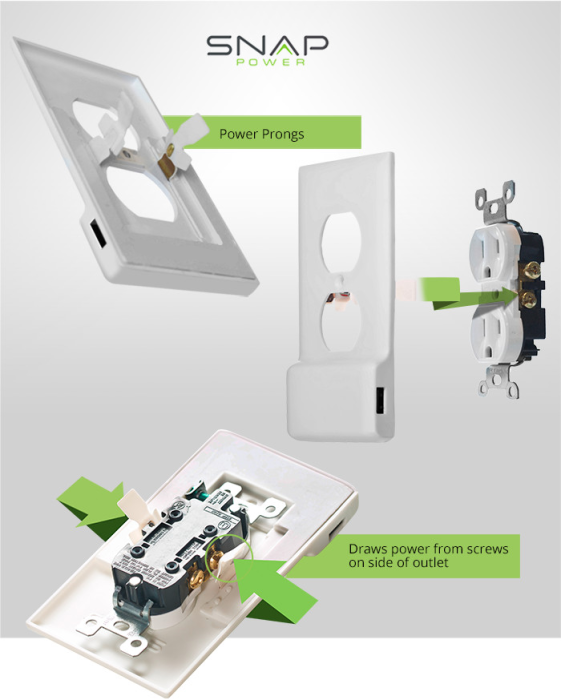 The creator of the SnapPower Charger is running a Kickstarter crowdfunding campaign to raise money for mass production.

There are already USB cover plates on the market, but most require hardwiring (which isn’t particularly difficult if you aren’t afraid of electricity).

The SnapPower Charger is different because it doesn’t require altering or adding any special wiring to your plug. Power is drawn from the screws on the side of the wall sockets. If you’ve ever accidentally touched those screws (as I have), you will know that there is a decent amount of electricity pulsing through those little guys.

The USB port draws 1-amp of power. The average smartphone will charge nicely with 1-amp, but many of the higher-powered tablets won’t juice up very fast on 1A (it will charge, just very slowly), so keep that in mind when deciding on whether you want to support the Kickstarter campaign.

The SnapPower Charger is expected to be available in two designs, Duplex and Décor. The former is for older style separate wall sockets and the latter for more modern one-piece sockets. They will come in white, light almond, and ivory.

The Kickstarter campaign ends May 15 and shipping is estimated for August of 2015.