Want a tablet that can run the thousands of apps and games available in the Google Play Store, but which handles multitasking the way a Windows notebook would?

Jide’s Remix Ultra Tablet promises to do just that. It’s a 2-in-1 tablet with an 11.6 inch display, a built-in dual-angle kickstand, and a wireless keyboard. It runs a custom version of Android called Remix OS which adds a taskbar and support for running apps in resizable windows… which makes Android feel more like Microsoft Windows.

Jide unveiled the tablet at the Consumer Electronics Show in January and now the company is running a Kickstarter campaign before bringing the Remix tablet to market. One goal of the campaign is to raise money… but another is to develop a community of beta testers willing to help improve the software.

The Kickstarter campaign is now live. 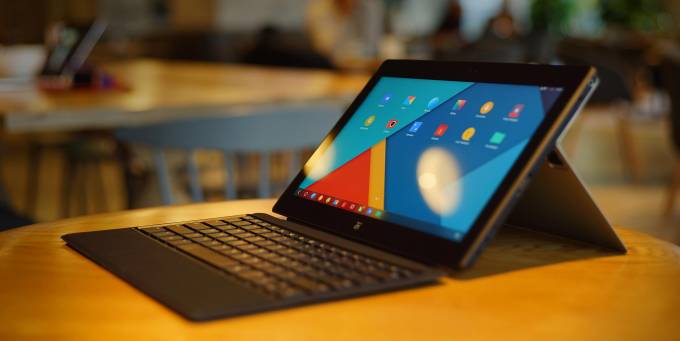 As promised, the company is promising to send a tablet to people who back the crowdfunding campaign at any reward level — including the $39 level. But as expected, there are a limited number of $39 rewards. Once they’re gone, you’ll have to pledge a higher amount to get your hands on the tablet.

The company says that’s just the initial allocation, but there may be additional tiers level.

It looks a lot like a Microsoft Surface, and like Microsoft’s tablet, the Jide Remix Tablet is designed to work both as a touchscreen tablet and as a notebook replacement. There are plenty of productivity apps for Android including office apps from Microsoft, Google, Kingsoft, Polaris, and others… but using them in full-screen only mode can be a bit awkward if you’re used to flipping back and forth between apps when entering data from an email or web page into a spreadsheet, for instance. Remix OS helps address that by letting you view multiple apps on the screen at once, or switch between apps by tapping icons in the taskbar.

On the other hand, the tablet has access to thousand of touch-optimized apps that might not be available for Windows tablet users. The Google Play Store is a bit livelier than the Windows Store these days, even if it doesn’t include legacy software been developed for desktop operating systems such as Windows, OS X, or GNU/Linux-based operating systems such as Ubuntu or Fedora.