When Google launched Android 5.0, the company changed the way recent content was displayed. Not only was the old system of side-by-side thumbnail icons replaced with a stackable card user interface, but Google also started displaying Chrome browser tabs, settings, and other content.

The recents screen also now displays virtually every app you’ve opened in recent memory… whether it’s currently running or not and whether you’ve rebooted your phone recently or not.

Want to cut down on the number of cards that are displayed? Developer Chainfire has released an app that does that. 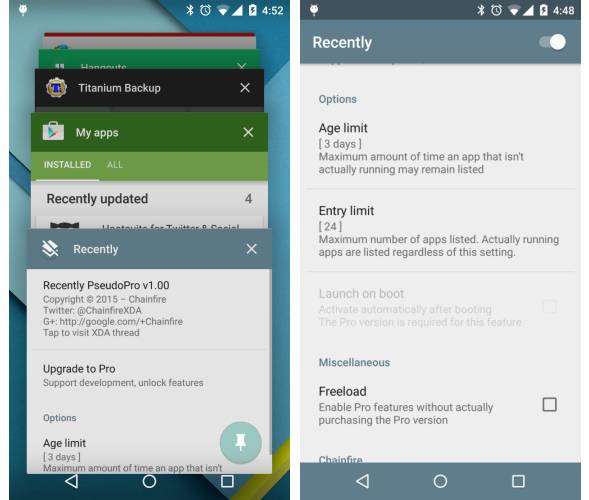 Recently is an app that lets you set an “Age limit” to display only content from a set period of time (12 hours to 2 weeks) or choose to display only apps that are running right now. You can also choose to have no limits…. but you don’t really need an app for that.

There’s also an “Entry limit” option which lets you display only running apps, all apps, or something in between. Note that running apps will always show up, so even if you only want to view 5 apps or 10 apps at a time, you’ll see more than that number if you have a dozen apps running.

Recently is a free app, but it requires root access. And if you want it to run automatically when you reboot your device, you’ll want to pony up about a buck for an in-app purchase or hit the “freeloader” button to get pro features for no additional fee if you can’t afford to pay.

Chainfire notes that Recently is a light-weight app that uses few resources because it only hides app that aren’t running and doesn’t actually kill any apps.