Chinese device maker Mele first caught my attention nearly 3 years ago when the company launched a TV box that could serve double duty as a little Linux PC. The company continues to offer a range of products including TV boxes with ARM chips and Android software. But they’ve also branched out into true PC territory.

The Mele PCG03 is a small, low-power computer with an Intel Atom processor and Windows 8.1 with Bing software. It’s available from Amazon for $199 or from AliExpress for as little as $149. 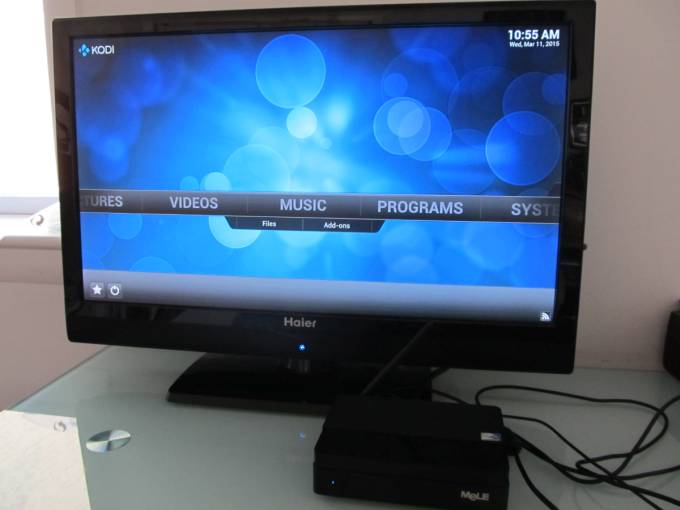 That might seem kind of expensive at a time when you can buy a Windows tablet for under $50, but the Mele PCG03 has some features that you won’t find on most inexpensive Windows tablets including full-sized HDMI and VGA ports.

It’s certainly not the most powerful desktop computer money can buy. But it’s a small, affordable, fanless PC which you can use as a home theater PC or even as a general-purpose desktop… as long as you don’t expect too much. 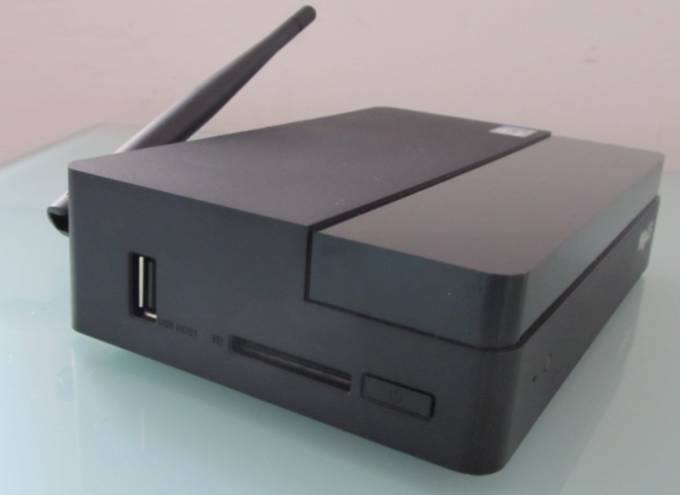 I got a first look at the Mele PCG03 at the Consumer Electronics show in January. For the purposes of this review, Mele sent me a demo unit to test.

There’s also an SD card slot and a power button one side of the computer.

You can open up the case by removing four screws from the bottom of the case and two from the back. But you won’t be able to upgrade the RAM or storage. They’re both attached to the system board, along with the processor. 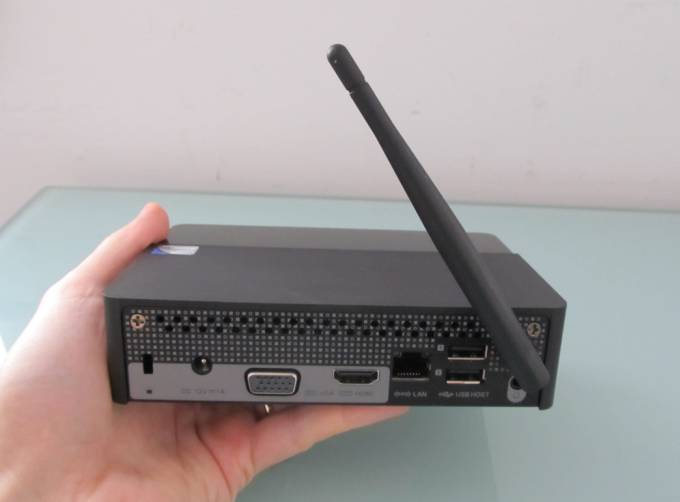 Interestingly it looks like the Mele PCG03 might be upgradeable though — because that entire system board is removable. There’s a motherboard with connections to the computer’s ports and wireless chips. But the CPU, RAM, and storage are on a daughterboard that you can pop out as if it were a stick of RAM in a laptop computer (after removing two more screws).

I have no idea if Mele plans to offer upgrade modules in the future, but it certainly looks like that’s something the company could do. Or maybe Mele just plans to re-use the case for future hardware and this design allows the company to offer a more powerful version of the PCG03 while changing as little of the design as possible.

The computer comes with a 12 volt, 2 Amp power adapter that’s a bit larger than a typical smartphone charger, but smaller than most laptop adapters. Interestingly the Mele website says the box comes with a 5 volt, 1A adapter. Go figure. 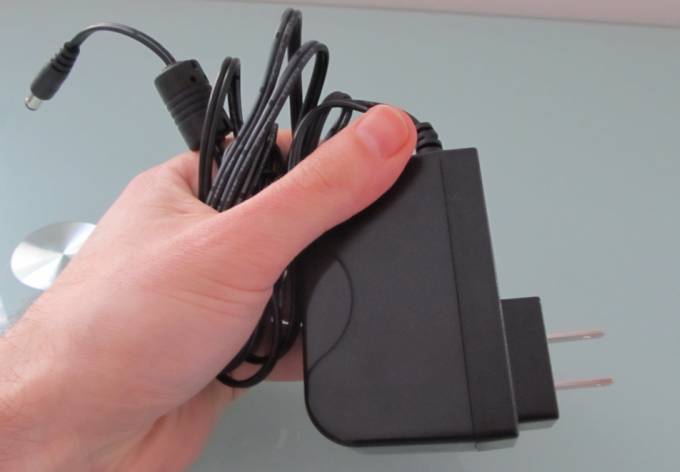 The Mele PCG03 is a bit larger than an Intel NUC or some other small Windows computers like the Zotac ZBOX pico family. But it’s still a relatively compact device that uses passive cooling (there are vents on the bottom of the case, but no fans) for silent operation. 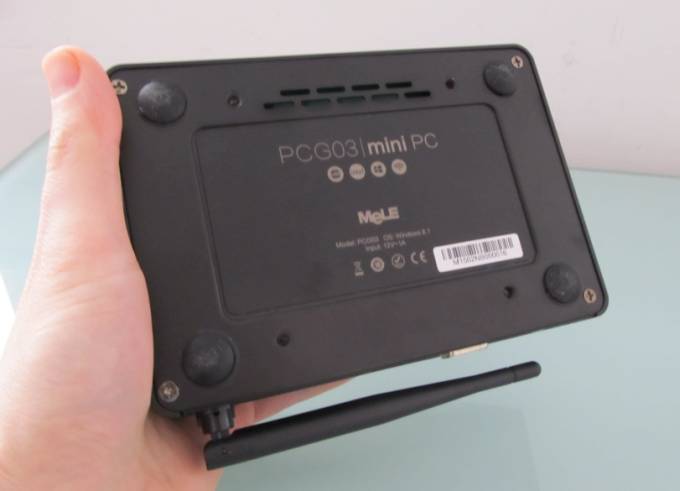 That makes it an interesting option for a living room computer — but there are a few limitations that you might want to consider before setting this up as a home theater PC. 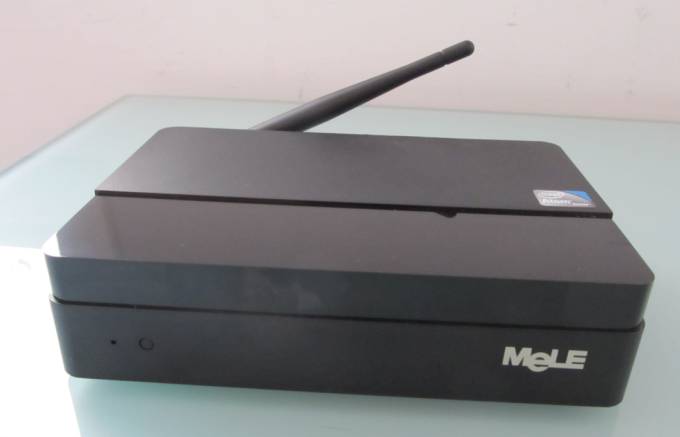 While a growing number of mini desktop computers are using the Intel Atom Z3735F processor, it’s really a low-power chip designed for use in tablets.

It features Intel HD graphics and I’ve had no major problems playing 1080p videos at 30 frames per second. But the system struggles to play YouTube videos at 1440p or higher resolutions and I wasn’t able to play H.265/HEVC videos at any resolution without encountering a lot of stuttering.

This isn’t a box you’ll want to use with a 4K TV. But it works pretty well as a media streaming device for 1080p or 720p televisions.

The box has just 32GB of built-in storage. That’s not a lot of space for storing your music or video collection, but it should give you room to install a few apps. After loading OpenOffice, GIMP, Kodi, Google Chrome, and a few other apps, I had just 8GB of free space left. 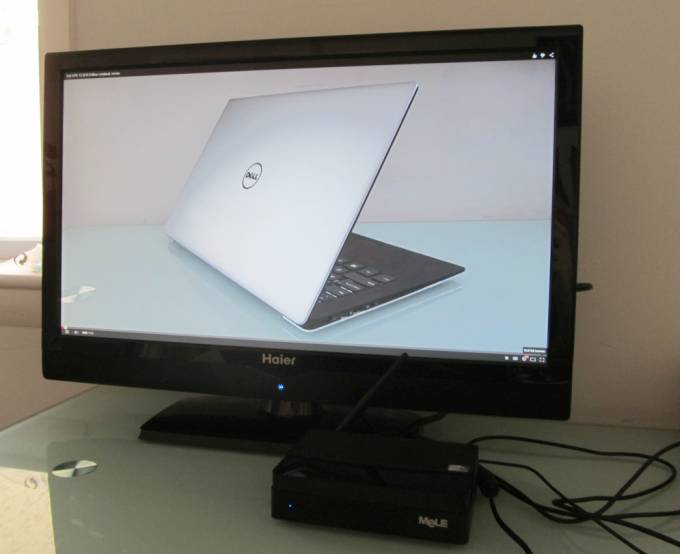 So if you want to use the Mele PCG03 for local media playback you might want to invest in a large SD card, USB flash drive, or external hard drive.

You can also use it to stream content over a home network. But probably the killer feature that sets a Windows box like this apart from a Roku, Amazon Fire TV, or Nexus Player is the number of options you have for streaming internet video. 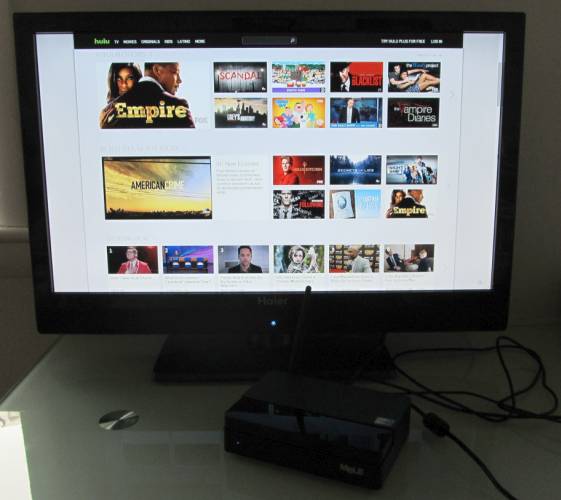 Want to watch movies or TV shows from Hulu? You don’t need to pay for a Hulu Plus subscription. Want to watch public domain films from Archive.org? No problem.

Feel the urge to try to sidestep geographic restrictions so you can watch content that’s not normally available in your country? It’s probably a lot easier to do that with a full-fledged PC than with an Apple TV.

I installed Kodi Media Center and the VLC media player apps and both worked flawlessly, allowing me to stream videos over a home network. I also had no problems streaming 1080p or lower-res videos from YouTube.

Note that there are two at least areas where a dedicated TV box come out ahead of a PC like the Mele’s. They’re usually cheaper and they’re designed to be used with a TV. That means they typically come with a remote control (or in the case of Google’s Chromecast, work with a smartphone or tablet app). 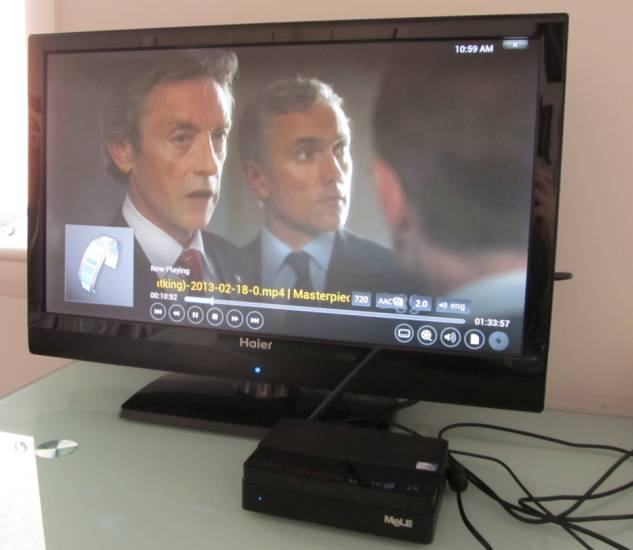 You can use a remote control with the Mele PCG03, but you’ll have to find your own and figure out how to use it with Kodi or other media center software. If you want to do most other things with the box you’ll probably want a keyboard and mouse… or at least a remote with a thumb keyboard and/or touch surface.

On the other hand, you can use the Mele PCG03 as much more than a simple media streaming device. It’s a full-fledged PC which means you can run desktop apps including Microsoft Office, LibreOffice, Adobe Photoshop, GIMP, Firefox, Chrome, and more. You can even do some light gaming… although the relatively slow processor and small amount of storage are better suited to web-based games or older titles than bleeding edge games. 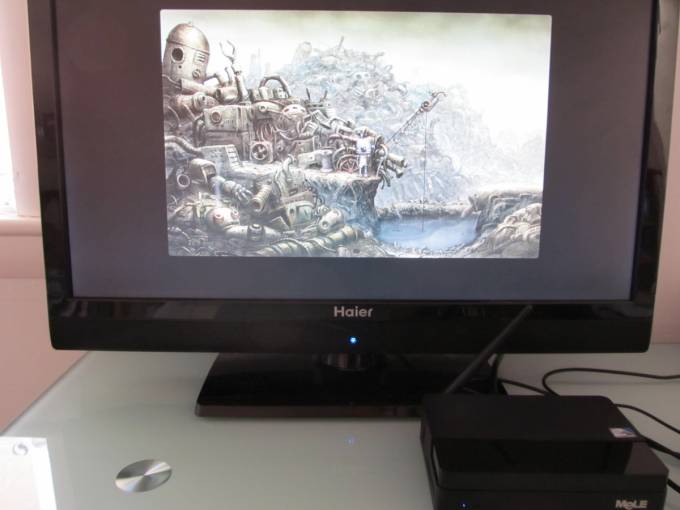 While testing the Mele PCG03 I was able to surf the web with a few browser tabs open while streaming video from YouTube in one of them. I was able to edit photos using GIMP while listening to music. At one point I streamed music from Xbox Music while playing a YouTube video (with the sound off) in full-screen.

Each of those tasks worked just fine… most of the time.

When I decided to try writing this review on the  PCG03 I ran into some trouble. I moved the computer to my standing desk where I normally use a laptop connected to a keyboard, mouse and monitor — but the PCG03 kept losing its WiFi connection every few minutes which made it difficult to get any work done. 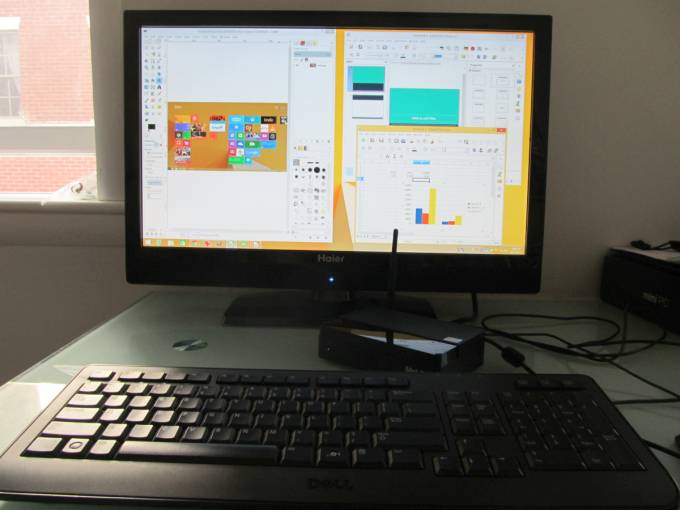 I moved it back to my secondary desk and left it to stream internet video and music for about an hour and the WiFi signal didn’t drop out once. I’m not sure if the problem was a dead spot at my standing desk or if I was simply asking the computer to do too much at once (the bottom of PC did get a bit warm to to the touch, but it didn’t feel hot).

It’s worth noting that my laptop supports dual-band 802.11ac WiFi while the Mele PCG03 only supports 2.4 GHz 802.11b/g/n WiFi. My office is on the third floor of our house while the wireless router is on the first.

I generally find that devices which can connect to the 5 GHz network perform better in the office than those that only work with the 2.4 GHz network. 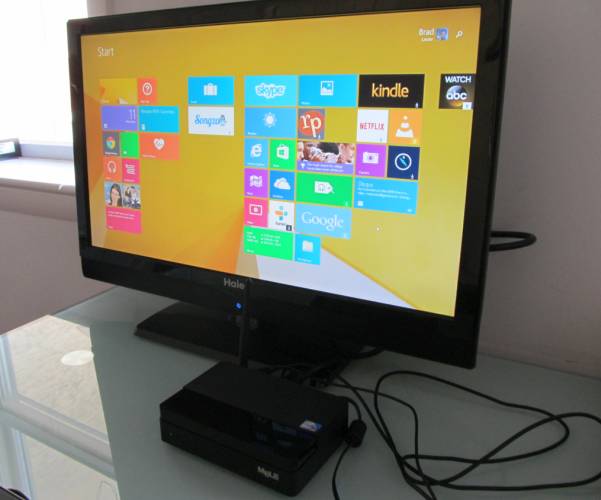 All told, I can say that the WiFi does work… under the right conditions. But it’s nice to know that the computer also has an Ethernet jack in case you want to plug it into a wired network for better stability.

Want some hard numbers? I ran a few tests to see how the Mele PCG03 stacks up against other devices with Intel Bay Trail processors. While the system feels fast enough for many day-to-day tasks, it’s no speed demon. In fact, it’s one of the slowest machines in its task when it comes to video transcoding. 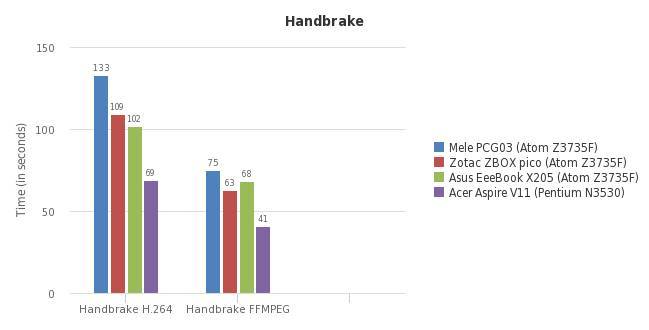 It took 133 seconds, for example, to transcode a video using Handbrake. The Zotac ZBOX PI320 pico has the same processor, but finished the same task 24 seconds more quickly. And the Acer Aspire V11 with its Pentium N3530 Bay Trail chip was almost twice as fast.

The gap isn’t as noticeable when you use a different encoder (FFmpeg instead of x.264), but the Mele PCG03 was still the slowest of the bunch.

The computer does support Intel’s Quick Sync technology, which allows Handbrake to transcode the same video in 67 seconds. I didn’t run that same test on all of the other computers in the chart, but the Asus EeeBook X205 still came out ahead of Mele’s computer with a score of 64 seconds.

The good news is that the Mele PCG03 isn’t much slower than those other computers… and it has more ports than most. But faster, more reliable WiFi would be nice.

With Intel’s next-gen low-power chips based on Cherry Trail and Braswell architecture on the way, it’s tough to recommend spending $150 to $200 on a mini PC with a Bay Trail chip. 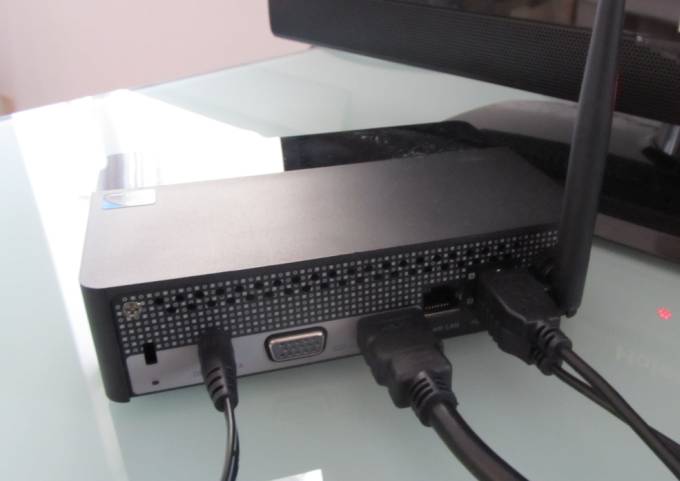 But if you’re looking for something you an buy today and don’t need the fastest model available, the Mele PCG03 certainly offers respectable performance, design, and expansion options.

While it comes with Windows 8.1 with Bing software, you can also install Ubuntu (and probably other operating systems) on the computer. But the price of the computer includes the $30 or so that Mele had to pay for a Windows license, so you should keep that in mind before replacing the OS.

Thanks to Mele for providing Liliputing with a PCG03 review unit.