Google Now is designed to show relevant information on your Android phone or tablet (or Chrome browser) when Google thinks it will be most useful to you. Originally Google Now would only show data from Google apps and services. Earlier this year the company started adding support for data from a select number of third-party apps.

Eventually Google Now could be open to data from any third-party app. 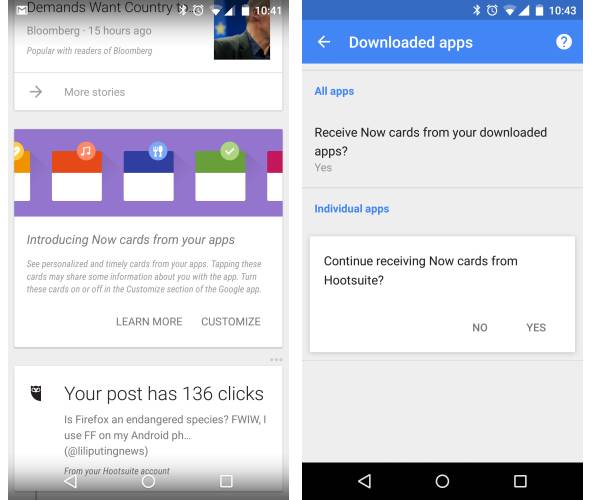 According to The Next Web, Google’s Aparna Chennapragada mentioned plans to release an open API for Google Now while speaking at a SXSW event this weekend.

On the one hand this could make Google Now way more useful, since it will allow all sorts of apps to show data you care about. On the other hand, it could lead to a lot of clutter.

Fortunately Google already has mechanisms for dealing with this. You can open the Google Now settings panel, choose the customize option, and then select “downloaded apps” to let Google know if you want to see cards from third-party apps or to enable or disable updates from individual apps.

Chennapragada also says that the way you use apps on your device will also help Google Now automatically figure out which cards to prioritize.