Chinese TV box maker CSQ has launched a new device that’s as much a mini desktop computer as it is a TV box. The CSQ CSW9 is a 6″x 6″ x 1.5″ computer with an Intel Celeron J1900 quad-core processor and support for Windows or Android software.

It’s available from AliExpress for about $200 and up. 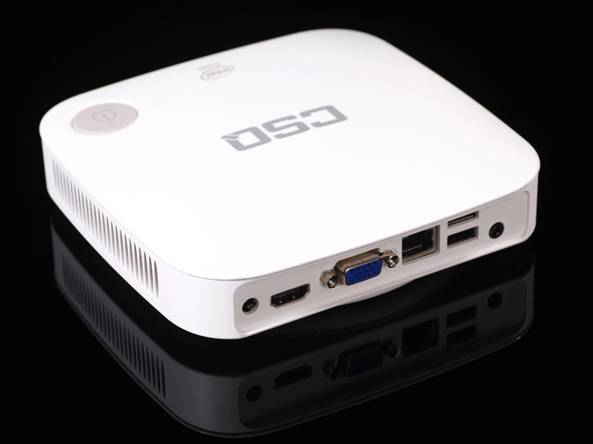 Note that while the product descriptions generally call the CSW9 a “Dual OS” device, that’s not the same as saying it’s a dual boot machine.… and if it does have Windows pre-installed, it’s not clear that it’s a licensed copy of Windows.

Update: It ships with Windows. See below.

Still, the CSW9 certainly has the hardware to support Windows 8.1 or other operating systems designed to run on computers with x86 chips.

The Celeron J1900 processor is 10 watt processor that’s a more powerful cousin to the Intel Atom Bay Trail chips found in a number of cheap Windows tablet, notebook, and desktop computers. This chip offers higher performance, higher clock speeds, and support for up to 8GB of RAM… although the CSW9 ships with just 2GB.

Update: Eric from Geekbuying.com says the CSW9 has no battery and the system is not fanless. While it should support a range of operating systems, the units he’s seen ship with Windows 8.1 with Bing software and not Android. It’s said to be able to support Ubuntu though.