Wacom’s Cintiq Companion 2 is a graphics tablet that you can connect to a Windows or Mac computer and use to draw with 2048 levels of pressure sensitivity. You can also use it as a standalone tablet though — the Cintiq Companion 2 is a fully functional PC with a 13.3 inch, 2560 x 1440 pixel display, an Intel Haswell processor, and Windows 8.1 software.

But some folks would rather run OS X on the tablet… and that’s exactly what The CG Alchemest has figured out how to do. 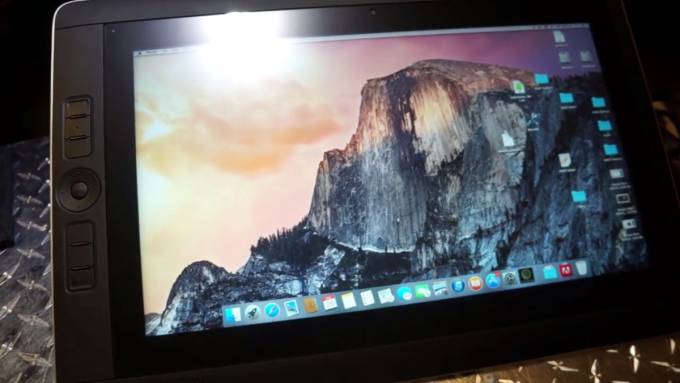 The touchscreen works, there’s a functional on-screen keyboard, and you can use pen input.

As of late February, there were still a few functions that weren’t working, including WiFi, sleep, the SD card, and the volume rockers.

This isn’t the first time The CG Alchemist has ported Apple’s desktop operating system to run on a Windows tablet. A few years ago he got OS X Lion up and running on Samsung’s Series 7 Slate PC (although he was operating under a different user name at the time).

You can find instructions for installing OS X on the Cintiq Companion at the Insanely Mac forum. Note that this isn’t officially supported by Apple or Wacom, so if you run into any trouble, you’re pretty much on your own.

But since Apple doesn’t sell any tablets running OS X, if you want an Apple tablet that’s more powerful than an iPad, a hackintosh is pretty much the only way to go.

The Cintiq Companion 2 sells for $1300 and up and there are models with Core i3 through Core i7 processors, up to 8GB of RAM, and up to 256GB of solid state storage.