There are a growing number of PC-on-a-stick devices featuring Intel Atom processors. Some run Windows. Others run Android. With a little elbow grease you can get some to run Ubuntu.

But now we’re also starting to see models that are said to dual boot both Android and Windows. The Aoluguya M1 is a dual-boot PC stick that sells for about $136 at DealExtreme. 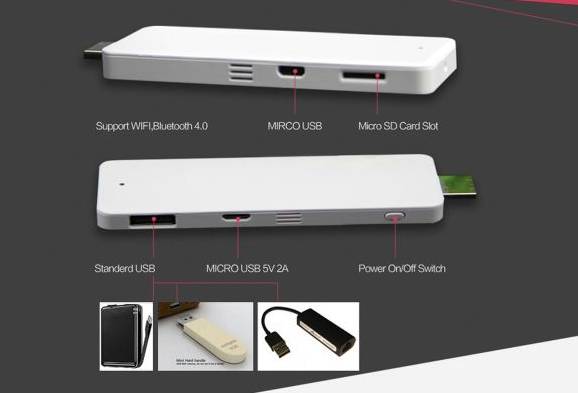 According to the product listing the Aoluguya M1 supports both Windows 8 and Android 4.4 and allows you to “boot Android from Windows desktop. We’ve seen dual-boot tablets with similar specs, but this is one of the first PC sticks I’ve seen with dual-boot features.

The little computer features 2GB of RAM, 32GB of storage, and an Intel Atom Z3735F Bay Trail processor. It has a microSD card slot for removable storage, supports 802.11b/g/n WiFi and Bluetooth 4.0, has to micro USB ports and one USB 2.0 port and connect to your TV or monitor with an HDMI connector.

Note that some companies have sold similar devices with unlicensed copies of Windows in the past. I can’t say for certain that the Aoluguya M1 comes with a valid Windows license, but the price tag seems reasonable for a device with a fully activated version of Windows 8.1 with Bing.

DealExtreme lets you return items for a full refund if you’re not satisfied.