Google’s hoping that the first modular Project Ara smartphones will be ready to ship to lucky residents of Puerto Rico later this year, and those phones are going to need camera. Fortunately for early adopters, Toshiba already has a working snap-in module ready to go. 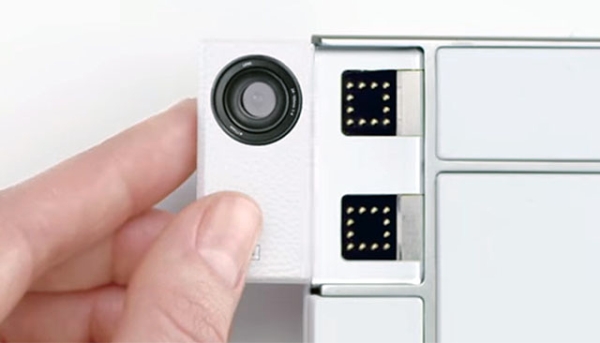 Toshiba will have two Ara-compatible, rear-facing camera modules. For those who want something that can stand in for a point-and-shoot in a pinch, they’ll have a 13MP camera. Those who are trying to keep their total Project Ara bill as close to Google’s ambitious $50 mark as possible can opt instead for a 5MP shooter. Interestingly enough, neither features an on-module flash at the moment. Toshiba may be of the mindset that the flash should be on a separate module, of they could simply still be working out how to fit it all in.

For taking selfies and making video calls, Toshiba is working on a 2MP front-facing camera module.

They’re planning on offering a bunch of other Ara modules, too, including NFC, memory expansions, and one that adds their blazing-fast Transferjet technology. It’s capable of wirelessly transferring files at speeds close to 560 Mbps. Other slick Ara modules we’ve heard about already include Sennheiser Audio. Smartphone maker Yezz claims they’ve created hundreds of prototype modules, and we should get a look at them soon.