Ting is a US wireless carrier that lets you pay for only what you use. Need a lot of data, but don’t make a lot of phone calls? No problem. Send thousands of text messages per month, but rarely use your phone’s web browser? That works too.

You might be able save a lot of money each month by paying only for the features you use.

Up until recently there was one thing you couldn’t use though: a GSM phones. Ting only supported phones that worked with Sprint’s WCDMA network. But now you can use GSM phones too. 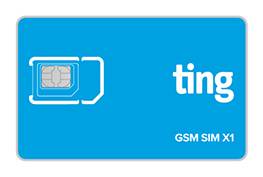 Ting has launched an open beta of its GSM service. Just buy a $9 SIM card, pop it in your unlocked T-Mobile compatible smartphone, and you’re good to go.

Keep in mind, while you don’t need an invitation to join the beta anymore, Ting is still calling its GSM service beta… which means there are still some kinks to work out. There’s currently no support for making international long distance calls.

Ting’s GSM network also doesn’t support international roaming yet, but the company helpfully points out that it’d probably be cheaper anyway to just pop out your SIM card and replace it with a pre-paid card from a local carrier if you’re traveling abroad.

Ting’s rates for GSM service are the same as for its WCDMA plans, which means you could pay as little as $9 per month for very basic phone service, or pay more when you use data, text messaging, or additional voice minutes.