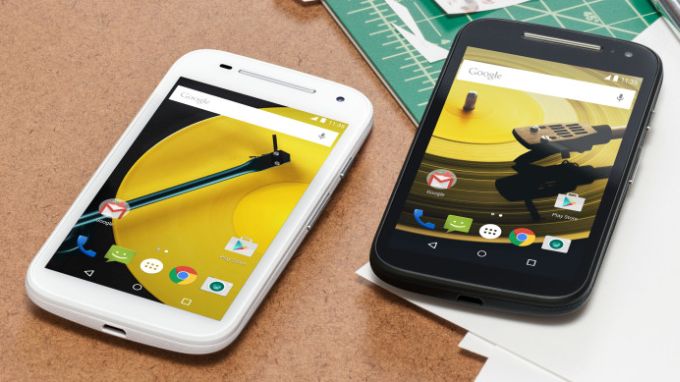 Both models feature 4.5 inch, 960 x 540 pixel IPS display, Android 5.0 Lollipop software, 1GB of RAM, 8GB of storage, and a microSD card slot. The 4G model is powered by 1.2 GHz Qualcomm Snapdragon 410 quad-core processor, but the 3G version has a quad-core Snapdragon 200 chip instead.

The phone features a 2390 mAh battery and has a 5MP rear camera with auto-focus and a VGA front-facing camera. Motorola will offer the phone in 50 countries starting today.

The new Moto E comes in black or white, but you can also add some color or protection with a Motorola Band (each phone comes with one, but you can buy a new one in one of six colors for $20) or a $20 Grip Shell.

By comparison, the original Moto E had a fixed-focus camera, a dual-core processor, a 4.3 inch display, a 1980 mAh battery, and 3G data.

The Moto E may not be competitive with the latest iPhone models or upcoming flagship phones from Samsung, HTC, or LG. But Motorola’s line of budget phones offer decent performance, a stock Android software experience, and a low price tag.

If you’re looking for somewhat beefier specs, the company’s Moto G has a higher-resolution display and camera for a not-much-higher price tag, while the $400 Moto X offers a speedier processor, more storage, and other premium specs.

via TechnoBuffalo and ABC News