Google’s Android Wear software for smartwatches lets you use a device like the Motorola Moto 360, LG G Watch or Asus Zenwatch to view notifications from your phone, search the web, or interact with Android apps while your smartphone stays in your pocket (or bag, or couch cushions, or whatever).

Officially you need an Android phone to use Android Wear. But unofficially? Developer Mohammad Abu-Garbeyyeh has figured out how to get his Moto 360 to talk to an iPhone. 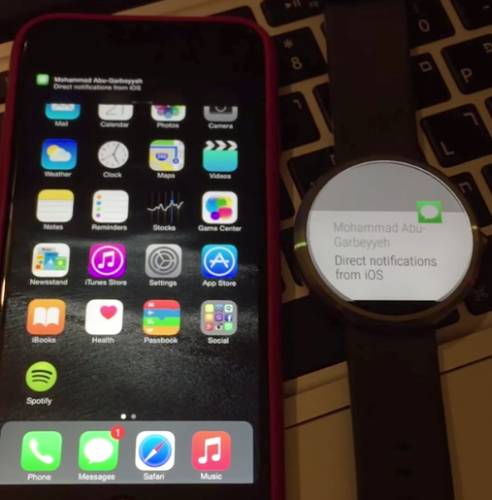 He’s posted a video showing the Android Wear watch displaying notifications shortly after they arrive on his iPhone. While he hasn’t released tools that will let you try this at home, he says it just requires an APK that can be installed on the watch. There’s no need to need to jailbreak the iPhone or root the watch.

That’s because notifications are sent using the Apple Notification Center Service which is available in iOS 7 and later. It sends notifications to the smartwatch over Bluetooth, allowing them to show up on Android Wear devices much the same way they do with other watches such as the Pebble smartwatch.

While this allows you to view iPhone notifications on you watch, you won’t get all of the functionality of Android Wear this way. In order to do just about anything else you still need an Android device.