Fujitsu has unveiled a wearable device that lets you interact with computers without touching them. It’s “ring-type device” that you wear on your finger to spell out letters in the air with your finger or perform other gestures.

You could use Fujitsu’s ring with a desktop or notebook. But the company really envisions the technology working with wearable computers such as head-mounted displays, like Google Glass. 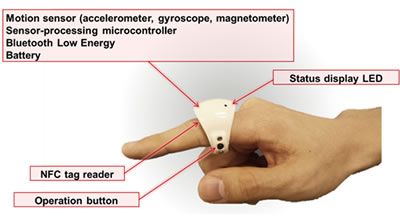 While a head-mounted display can bring text and graphics to your field of vision and respond to voice commands, it can be tough to select a “yes” or “no” button or enter special characters.

Fujitsu’s ring uses motion sensors to track the movement of your finger, and NFC to communicate with your wearable computer.

Fujitsu doesn’t see the ring as a consumer device at this point, but it could be used by field workers who might need to enter numbers or other characters at times when they can’t pick up a keyboard.

The company says its technology can recognize numbers drawn in the air with about 95 percent accuracy. Letters can be tougher to recognize, but Fujitsu says it has technology to rule out the unwanted lines you might accidentally draw in the air between letters to help improve handwriting accuracy.

The ring weighs just about 10 grams (a little over a third of an ounce), and it could be put into production later this year after Fujitsu’s run some more tests.

Fujitsu isn’t the only company working on a ring-shaped controller. Startup Logbar had a successful Kickstarter campaign for a motion controller called Ring last year. Unlike Fujitsu’s ring, the Ring is a aimed at consumers… but it’s not currently available for purchase.

One reply on “Writing on air: Fujitsu’s smart ring designed for gesture controls”