Toshiba is expanding its TransferJet technology which lets you move files between devices without wires. For instance if you’ve got a TransferJet-enabled SD card and a USB dongle for your PC, you can:

The same technology supports transfers of videos and other files and it can be baked into storage cards, USB dongles, or integrated directly into phones, tablets, laptops or other devices. 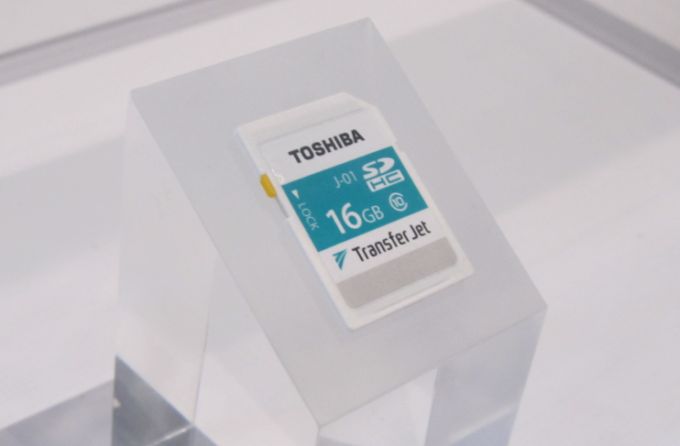 Toshiba’s actually been part of a consortium including Sony and Olympus that’s been working on TransferJet for a while. What’s new at the Consumer Electronics Show is that Toshiba is introducing the first TransferJet adapter that works with iPhones and iPads, as well as second-generation micro USB adapters for Android phones and tablets.

But I hadn’t actually seen TransferJet in action before, and I was pretty impressed with the demo. With theoretical top transfer speeds of 560 Mbps, you can move photos or videos much more quickly with TransferJet than with Bluetooth or even some USB cables.

In practice, you’ll probably see slower speeds, but a Toshiba representative demonstrated the technology by shooting a short video with a smartphone camera, tapping it against a laptop with a USB dongle, and the video started playing on the PC almost immediately after transferring at about 189 Mbps.

For now you need a TransferJet-enabled SD card and/or USB or micro USB dongle to use the technology. But eventually TransferJet hardware could be built into mobile devices much the way NFC is today.