Need a little extra power to keep your smartphone, tablet, or other devices charged throughout the day? There are plenty of portable power packs on the market.

But Koonhome‘s power banks have one unusual feature: they’re stackable. This lets you recharge a group of batteries using a single power cable, and then just grab a battery pack from the pile when you walk out the door. 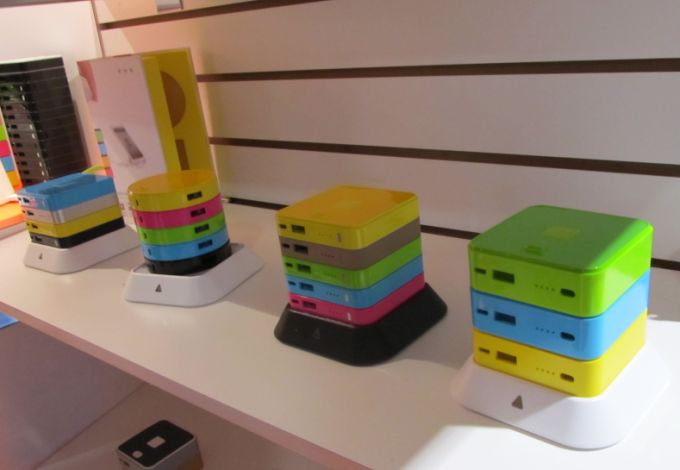 When I first ran across the stackable power packs, I thought you might be able to actually stack them on the go, using several 3,000mAh batteries as if they were a single 9,000mAh battery, for example.

That’s not quite how they work though. Each unit is a separate battery. But they have pins that allow them to pass a charge from one to the next, and magnets that make them easy to stack on top of one another: they sort of click into place.

In fact, the charging and magnetic lock mechanism looks remarkably similar to another stackable product unveiled at CES this week.

The idea is that you can stack a bunch of these batteries on a charger, connect a micro USB cable, and they’ll be charged one by one. Press a button on the front of any of the batteries in the stack and the LED lights on all of the batteries will light up to let you know how much of a charge they’re holding. That way you know which batteries to take with you and which to leave on the charger.

I could see this coming in handy if there are several people in your household who need a little extra juice to keep their phones charged throughout the day.

Koonhome offers 3,000 and 6,000mAh models in a range of colors and in several shapes (square or circular).

Right now they’re only available in China, but part of the reason companies like Koonhome exhibit products at CES is because they’re looking for international partners and distributors.