Samsung’s getting ready to launch its first smartphone that runs Tizen, a Linux-based operating system. But why would you spend money on a Tizen phone when you could get one of Samsung’s Android phones that with support for more than a million third-party apps?

Because Samsung’s Tizen phones might be able to run some of those same Android apps.

Tizen Experts reports that Samsung’s first Tizen phone will be able to do just that. 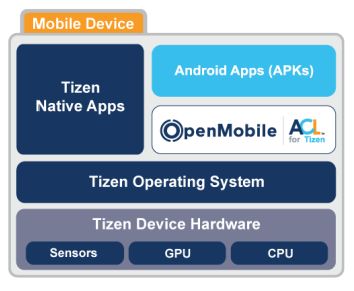 Unlike BlackBerry OS 10 and Jolla’s Sailfish operating systems, Tizen doesn’t have support for Android apps built into the operating system. But Samsung will reportedly use OpenMobile’s Application Compatibility Layer to allow Android apps to run on the Samsung Z1 smartphone.

OpenMobile has been developing its ACL software that lets Android apps run on other platforms for a few years.

In order to use the technology on a Samsung Z1, you’ll just need to find an Android app you want to install in the Tizen Store and when you install it you’ll be prompted to install ACL at the same time.

While not every Android app works with ACL, this will allow a number of popular apps including WhatsApp to run on the Samsung Z1, even if the developers haven’t actually ported their software to run on Tizen.

That’s certainly one way to make a new mobile operating system useful. An even better way would probably to be to attract a large pool of developers to create native apps. But there’s a chicken-and-egg problem. Until there’s a substantial number of people using Tizen phones there’s not much reason for developers to create apps… and vice versa.

It’s much easier to see what Samsung gets out of Tizen. Right now most of the company’s smartphones run Google’s Android operating system, and while Samsung sells millions of phones it doesn’t have as much control over the user interface and ecosystem as it would with Tizen or another operating system.

Google also gets a cut of all apps and other content sold through the Play Store, while most of the money Samsung makes on its smartphones comes from sales of hardware. A Tizen App Store would be a new source of revenue for Samsung.

The company is already using the software for smartwatches, Smart TVs, cameras, and other devices.