Gaming company Razer offers gaming PCs, accessories, and tablets. Now the company is launching its own game console for the living room.

The Razer Forge TV is a small box with the guts of a high-end Android smartphone which is designed to bring Android games to your TV. Not interested in playing Android games on a big screen? There’s also an app called Razer Cortex Stream on the way. It’ll let you stream PC games from your computer to your TV through the Forge TV.

The Razer Forge TV should launch in the first quarter of 2015 with a starting price of $100. A beta release of the Cortex Stream app will be available in the second quarter of 2015 for $40. 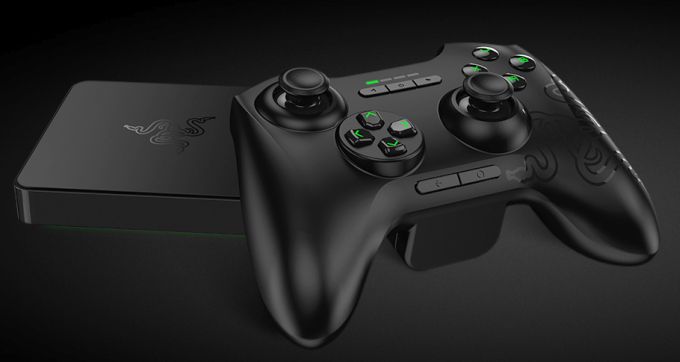 Razer’s micro-console runs software based on Google’s Android TV. That means in addition to gaming, you can use it to stream music, movies, and other content from services such as YouTube, Google Play, Hulu Plus and Netflix. It also supports Google Cast, letting you select content on your phone, tablet, or PC and send it to your TV through the Forge.

It supports up to 4 game controllers at once, works with voice search via a remote app that you can run on a phone or tablet, and allows you to use a gaming keyboard and mouse as well as a gamepad.

Razer will sell the Forge TV itself for $100, but if you want a game controller you can get the box and the Razer Serval Bluetooth game controller for $150. The controller is also available separately for $80, while the new Razer Turret wireless gaming keyboard and mouse sells for $130 and is designed to let you play PC games on the couch when you’re using the Cortex Stream service.

Oh, and if you’re thinking all of those accessories and software fees are starting to add up, the Razer Cortex Stream app for streaming PC games comes free when you buy the Forge TV/Serval Controller bundle or the Turret or Serval on their own.

Razer isn’t the first company to offer a solution for streaming PC games to a living room. But unlike NVIDIA’s GameStream technology, you don’t need a specific graphics card to use Cortex Stream and the $100 Forge TV is probably cheaper than most PCs that will be able to take advantage of Steam’s game streaming solution.

2015 could also be the year Android TV starts to take off. While the Google Nexus Player was the only device to ship with Google’s new TV-centric software in 2014, in addition to the Razer Forge TV, Sony has announced that all of its new smart TVs released this year will feature Android TV software.