Lenovo’s new 8 inch Windows tablet features an Intel Atom Bay Trail processor, a full HD display, up to 15 hours of battery life, and a built-in kickstand. The Lenovo Tablet Yoga 2 8 Windows tablet was first announced in October, along with other Android and Windows members of the Yoga Tablet family.

But Lenovo will actually begin selling the Yoga Tablet 2 8 this January, while the other models have been available for months. The company’s used that extra time to add a feature called AnyPen to the 8 inch Windows tablet. 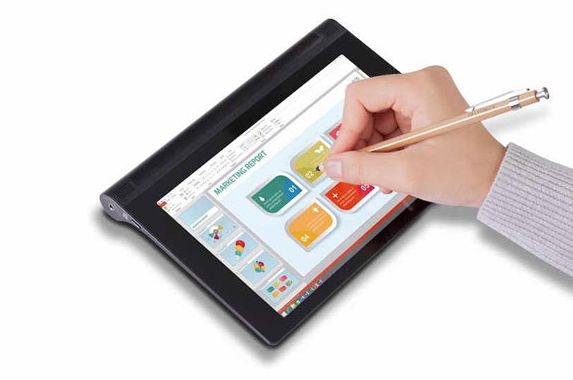 AnyPen technology lets you use, well, just about anything as a pen. You don’t need to use a finger or a digital pen to write or draw on the screen. you can pick up any ordinary pen or pencil… or even a screwdriver, scissors, or other pointy device.

The idea is that it it can be tough to perform some tasks on a Windows tablet, particularly one with a small, sharp screen, when you’re using only your fingertip (which may be too big for precision work). But you might not want to buy an expensive tablet and pen solution with an active digitizer… only to end up misplacing the pen.

The Yota Tablet 2 8 with AnyPen support should be available this month for $299 and up.