The first Intel Broadwell chips based on 5th-gen Core technology began shipping in the fall. But those first Broadwell chips were all part of the low-power, 4.5 watt Intel Core M family aimed at thin-and-light, often fanless devices including 2-in-1 notebook/tablet products.

Intel says its 5th-gen Core i3, Core i5, and Core i7 chips offer better graphics performance and enable longer battery life than their 4th-gen Haswell predecessors. They also offer a slight CPU boost, but Intel isn’t making any big promises on this front. Broadwell represents a “Tick” in Intel’s “Tick-Tock” strategy, which means this update is more about improved efficiency than performance gains. 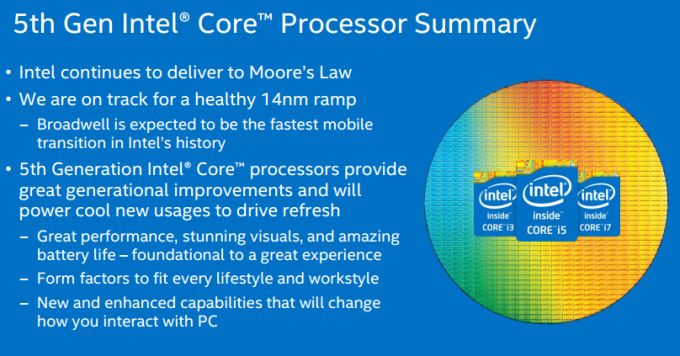 That doesn’t mean Broadwell doesn’t offer some big improvements. While Intel says you should only expect about a 4 percent boost in productivity apps, the chip maker says Broadwell chips offer up to 22 percent better 3D graphics and the ability to convert video files up to 50 percent faster than the equivalent Haswell chips they replace. 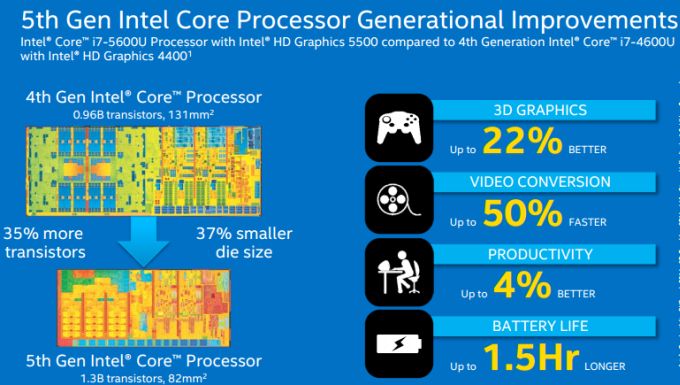 In fact, if you look at a diagram of Intel’s latest notebook chips, you can see that about two thirds of the die space is used for the graphics processor, not the CPU. 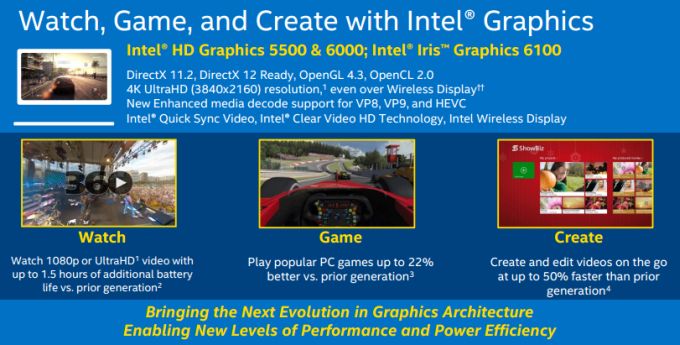 If you’re wondering what’s up with Intel’s Iris Pro graphics, you’ll have to wait until the company introduces its more powerful 45W Broadwell chips for high-performance laptops later this year to find out. That should happen sometime in mid-2015.

Meanwhile, thanks to the new processor’s smaller, 14nm die size and improved efficiency, Intel says a laptop with a new Core i7 processor could get up to 1.5 hours more battery life than one with a 4th-gen chip. 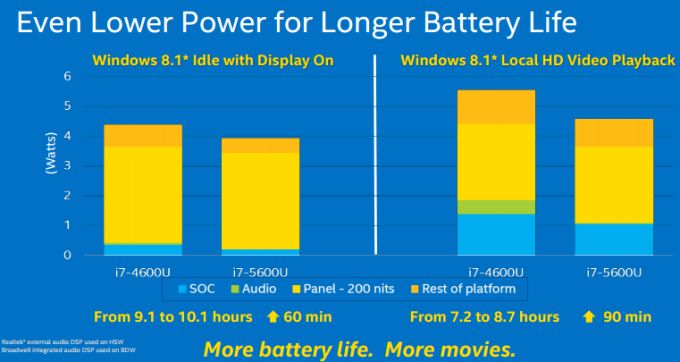 More importantly, Intel’s new 2015 chips aren’t just going head-to-head with models from 2014. Many laptop owners hold onto their computers for 3 or 4 years, and Intel figures that means if you’re still using a laptop with a Core i5-520M processor, upgrading to a system with a Core i5-5300U chip will net you 12 times better graphics performance, 2.5 times the productivity performance (using Microsoft Office, for instance), twice the battery life, and 9 times faster wake times, among other things. Note that Intel is fudging things a bit here by assuming you’re older laptop is running at 18 watts, even though it has a 35 watt chip.

Broadwell is also pin-to-pin compatible with Haswell, which means that device makers should update existing hardware made for 4th-gen Core chips to 5th-gen hardware with minor modifications. Broadwell chips will also be priced comparably to the Haswell chips they replace.

Intel says that will help PC makers move from Haswell to Broadwell quickly, and the company is predicting the fastest transition from one architecture to the next in its history, thanks in part to the expected launch of Celeron through Core i7 chips by the end of the first quarter of 2015.

Intel is continuing to push the Core M processors introduced in 2014, but the company says they’re designed for premium tablets, super-slim notebooks, and small 2-in-1 devices. The new more powerful chips are designed for larger 2-in-1 systems as well as notebooks and desktops.