First introduced in Europe last fall, the tablet isn’t yet available for purchase in the United States. But when I caught up with Hisense at CES this week, I was told the company does plan to sell the Sero 8 Pro in the US this year, even though the price and release date haven’t yet been announced. 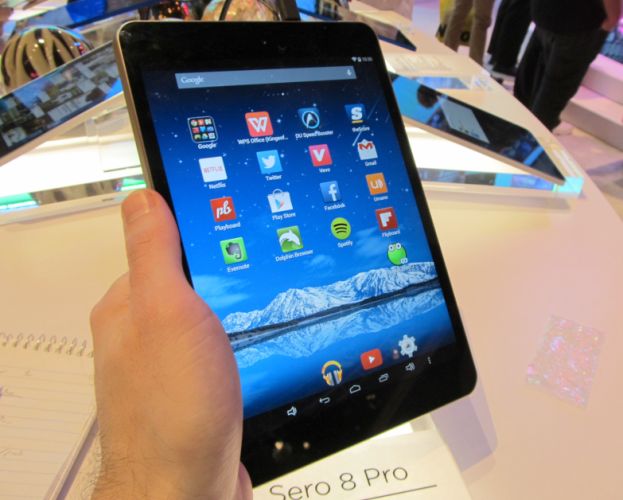 The tablet has an all-metal case that measures just about a quarter of an inch thick. Under hte hood it has Rockchip’s quad-core ARM Cortex-A17 processor, a 4500 mAh battery, 2GB of RAM, and 16GB of storage.

The tablet has a 5MP rear camera and 2MP front camera.

It runs Android 4.4 KitKat, but the Sero 8 Pro seems to have a custom app launcher which places all of your apps on the home screen rather than tucking some away in an app drawer. There are also pages of the home screen dedicated to videos, music, and recommended news items.

Hisense made a bit of a splash in the tablet space a few years ago by offering a 7 inch model that was nearly identical to the original Google Nexus 7, but which had a microSD card for removable storage, while Google’s tablet did not.

The new 8 inch tablet looks pretty good on paper, and feels pretty good in person, although it’s tough to really judge a tablet’s performance based on a few minutes testing it at a trade show. There are also far more decent-quality/low-price tablets on the market in 2015 than there were a few years ago when the HiSense Sero 7 Pro launched.

Still, for the right price, this new model could be an attractive option. Keep an eye out for it at Walmart, which is likely to be one of the first places it’ll be available.