Archos has been bringing selling smartphones for a few years, but up until recently the most interesting thing about the French company’s phones had been their low prices… which were accompanied by the kind of low-quality specs you’d expect from cheap smartphones.

But it doesn’t take a lot of money to build a halfway decent phone these days, so while Archos is still focusing on the budget end of the smartphone space, some of the company’s newest models actually don’t look half bad.

For example the Archos 50 Diamond is priced at just $200 without a contract, but it has a decent screen, a reasonably fast processor, and a reasonably large battery. 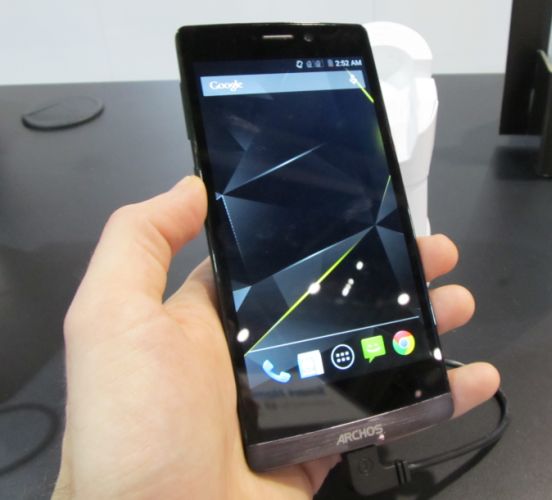 The phone has a 5 inch, 1920 x 1080 pixel IPS display that looks good when viewed from just about any angle.

It’s powered by a 1.5 GHz Qualcomm Snapdragon 615 octa-core ARM Cortex-A53 processor, and while I didn’t have a chance to run any benchmarks or really CPU-intensive tasks when I spent a few minutes with the phone at CES this week, it certainly didn’t feel particularly sluggish when opening or switching between apps.

Other features include 2GB of RAM, 16GB of storage, a microSD card slot, a 2700mAh battery, a 16MM rear camera, and an 8MP front camera. The Archos 50 Diamond supports WiFi, Bluetooth, and 4G LTE with support for dual SIM cards.

It runs Android 4.4 KitKat and comes with access to the Google Play Store and other Google apps. The Archos 50 Diamond seems to be running the stock version of Android without any major modifications, although the phone does have some Archos apps pre-loaded, including the Archos Video Player.

The phone has a decidedly plastic case, but it’s not a bad looking device, especially for the price.