Acer is adding two new models to its line of Chrome OS laptops. The Acer Chromebook 13 Touch is basically the same 13 inch model with an NVIDIA Tgra K1 processor and long battery life the company launched in 2014. It just has a touchscreen.

The new Acer Chromebook 15, on the other hand, is something new. It’s the largest Chrome OS laptop any company has released to date.

Both made appearances at CES this week. 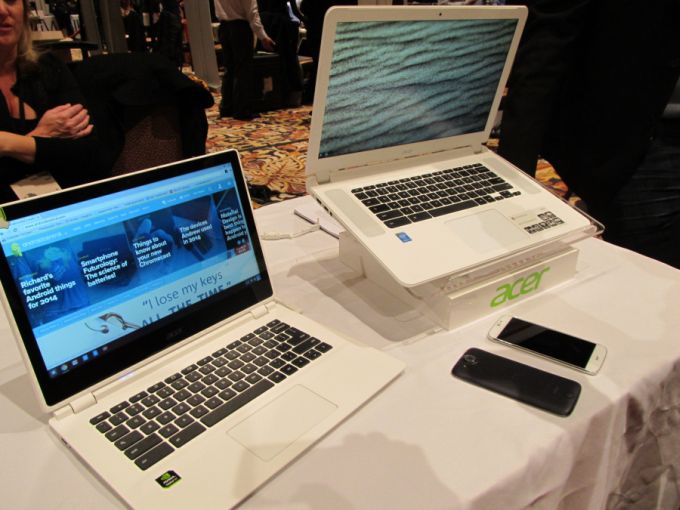 The 13 inch model offers up to 13 hours of battery life, has a thin and light design, and now offers an optional touchscreen.

While you don’t need a touch panel to use Chrome OS, it’s not an entirely useless feature. You can reach up to touch the screen to scroll through web pages, resize or move windows, or launch apps. Now that there are also a growing number of Android apps that can run on Chrome OS, touchscreens could get even more useful.

Acer’s new 15.6 inch Chromebook has an Intel Celeron 3205U processor, and a really big screen. Since it’s wider than a typical Chromebook, there’s also room on the sides of the keyboard for stereo speakers that won’t be obstructed by your hands or lap.

The Chromebook 15 is kind of heavy for a Chromebook, weighing 4.85 pounds. But if you think of Chrome OS as a general-purpose operating system and not just the OS that PC makers slap on cheap, portable notebooks, it kind of makes sense. There are plenty of small Chromebooks, but there’s been a big gaping hole in the market for large-screened models. But as we know from the Windows notebook space, laptops with big screens and low prices sell like hotcakes.

So folks who want an easy-to-use operating system and don’t care that much about portability now have a Chrome OS option.