While the most unusual device I saw was probably the Egreat i5 desktop computer that’s barely any thicker than the USB ports it houses, the company also had several other Window systems on display, most of which are a bit bigger, but which also feature a wider selection of ports. 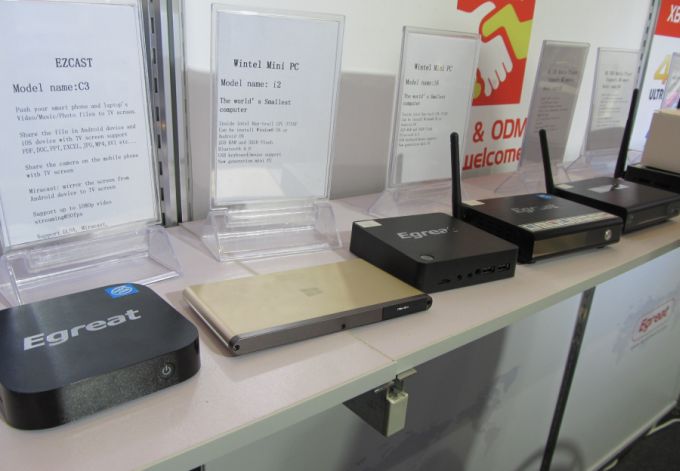 Just about all of these little computers feature Intel Atom Z3735F quad-core Bay Trail processors, 2GB of RAM, and up to 32GB of flash storage.

They all support WiFi and Bluetooth, HDMI, and most have microSd card slots and Ethernet jacks as well. Larger models tend to have more USB ports, and some have separate headphone and mic jacks. At least one model I saw even had a VGA port in addition to an HDMI port.

These little computers officially support Windows 8.1 or Google Android. When I asked about Linux support, I was told “that’s older and works better for TV boxes,” which I suspect means there’s simply greater demand for Android and Windows and Linux is viewed as something companies like Egreat can use to create their own custom operating systems… which they don’t do much of anymore.

It’s probably possible to load Ubuntu or other desktop GNU/Linux-based operating systems on these boxes. But I wouldn’t be surprised if you need to shoehorn them on by using a 32-bit bootloader and a 64-bit operating system, much as you do with other Intel Atom-based computers I’ve tested (such as the Asus Transformer Book T100 and Zotac ZBOX PI320 Pico).