Chinese tablet maker Chuwi has revealed a new tablet that can dual boot Windows and Android.

The company posted a video of the 8 inch tablet doing just that on Youku. First it’s shown running Windows 8.1… then the user restarts the tablet and it launches Android 4.4 KitKat. 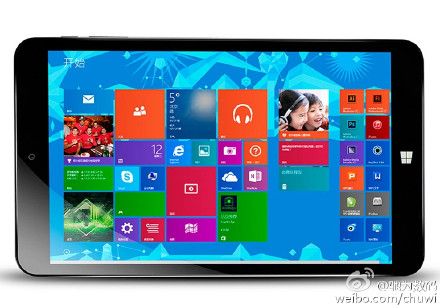 Announcing the tablet on social network Weibo, Chuwi didn’t provide many details about the device. But if this is the same Chuwi Vi8 tablet the company first teased a few months ago, it has an 8 inch, 1280 x 800 pixel IPS display, 2GB of RAM, 32GB of storage, and an Intel Atom Z3735F quad-core Bay Trail processor.

That kind of hardware should be able to run either Android or Windows. But most companies that sell tablets in the West choose to install either one operating system or the other.

During the 2014 Consumer Electronics Show Asus introduced 2-in-1 tablet/notebook hybrid called the Transformer Book Duet that could run Android and Windows, and both Intel and AMD were pushing their own Dual OS platforms in hopes of getting device makers to offer Android/Windows hybird tablets.

All of those projects fizzled out, possibly due to pressure from Google and Microsoft. Reports suggested neither software maker liked the idea of its operating system running on dual OS hardware.

Chinese companies that produce devices for sale in China have a habit of doing things their own way though, so while it’s certainly possible that Chuwi is working with the blessing of Google and Microsoft, it’s also possible that the company simply doesn’t care what either OS maker thinks.

Either way, it’ll be interesting to see if the dual-boot Chuwi Vi8 is available for purchase outside of China anytime soon, how much it will cost, and whether anybody actually wants a tablet that runs two operating systems… but which requires you to reboot to switch between them.