Tronsmart offers a pretty wide range of boxes designed to bring Android apps to your TV. They come in different shapes and sizes, sport a range of processor and storage options, and sell for as little as $50 or as much as $150 or more.

The Tronsmart Orion R28 is one of the company’s more recent models, and it packs a fair amount of power into a box. 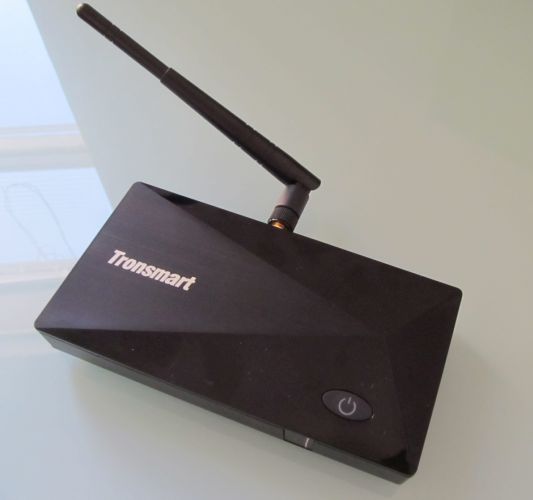 You can buy a Tronsmart R28 from Geekbuying for $95 and up.

The retailer sent me an Orion R28 with 2GB of RAM and 16GB of storage to test, and it’s a pretty powerful little box… for folks who know what to do with a device of this type.

Tronsmart’s Orion R28 features a Rockchip RK3288 ARM Cortex-A17 quad-core processor and Mali-T764 graphics. There are a few different models available with 2GB to 4GB of RAM and 8GB to 32GB of storage.

You can connect the box to your TV or audio gear using HDMI, AV, and S/PDIF jacks, and there’s an IR port on the front which lets you use the included remote control.

The box itself is a rectangle with a sloped, angular top. It’s not the smallest box of its type, but it’s still compact enough to hold in one hand. 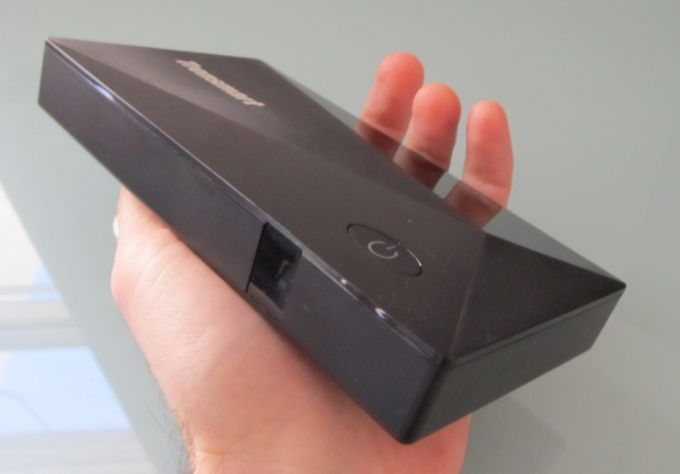 There’s a power button at the top which you can tap to put your device to sleep. This is sort of like turning off the screen on an Android phone or tablet. Tap the button again and your display should spring to life in second or two.

If you’d prefer to actually shut down your device when it’s not in use you can press and hold the power button or use an on-screen power button to bring up the power off option. 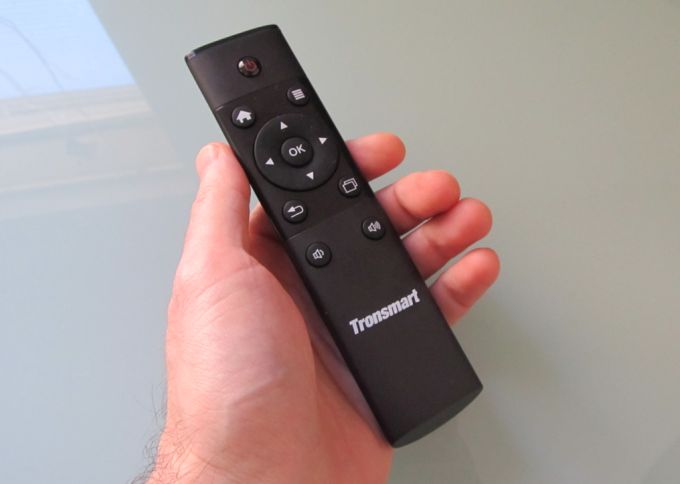 Tronsmart’s wireless remote control also has a power button, as well as home, menu, and back buttons, arrow keys, and an OK/select button.

You can tap the power button to put the device to sleep or wake it. But if the system is turned off you’ll need to press the power button on the box itself to turn it back on again: the remote won’t do the trick.

There are volume buttons on the remote, and one special button that looks like an Android recent apps button. But pressing that button actually turns on mouse mode, letting you use the arrow keys to control an on-screen cursor. This can come in handy for navigating apps that don’t respond well to the other buttons… but it’s also a pain in the behind to slowly move a cursor across the screen this way. 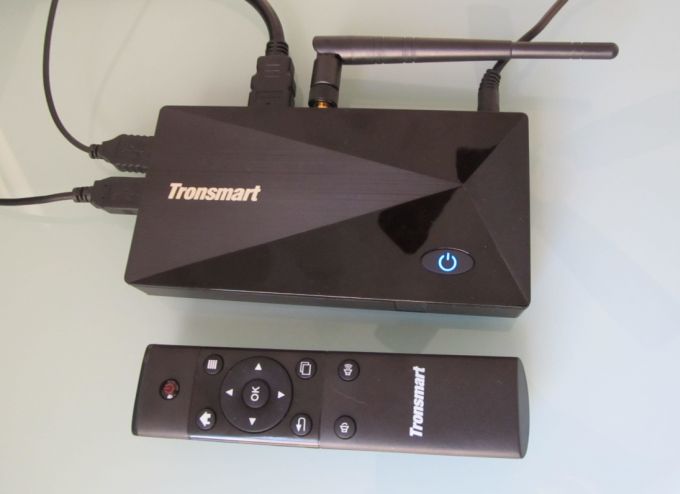 For the most part you’ll probably have a better experience if you connect an actual mouse, touchpad, or other pointing device which lets you move the cursor more quickly. It’s also tough to do some things (such as pulling down the notification shade) with the remote alone.

I also like to plug in a keyboard, because using the on-screen keyboard on a device that doesn’t have a touchscreen can be an exercise in frustration.

Welcome to the world of TV boxes that run software designed for smartphones and tablets. 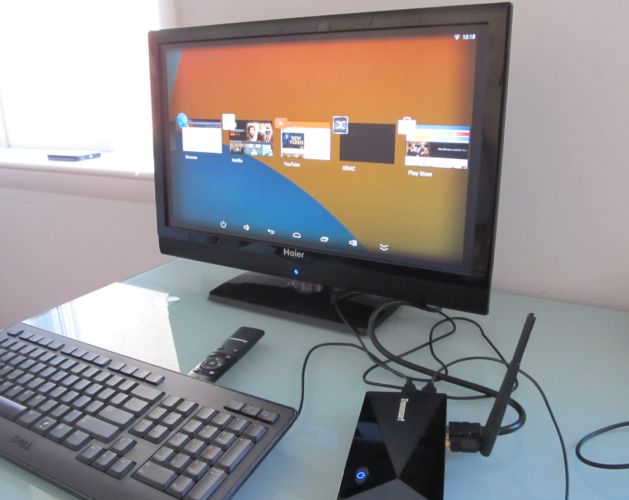 There are plenty of devices such as the Google Nexus Player (with Android TV), Apple TV, Roku, or Amazon Fire TV which are designed specifically for televisions. These products are designed to be used with a remote control rather than a touchscreen. The Tronsmart Orion R28 isn’t… but on the other hand, the Orion R28 can run thousands of apps that aren’t normally available for those other devices, because it has full access to the Google Play Store.

Not all of those apps actually run well on this device, because they haven’t been optimized for TVs. But in many cases you can use a mouse or game controller to play games, use online video apps, surf the web, or do other things that might not be easy to do on a Nexus Player or Roku.

This box has the same processor and same amount of RAM as the Rikomagic MK902 II I reviewed earlier this month. So it should be no surprise that it gets nearly identical scores on benchmark tests. 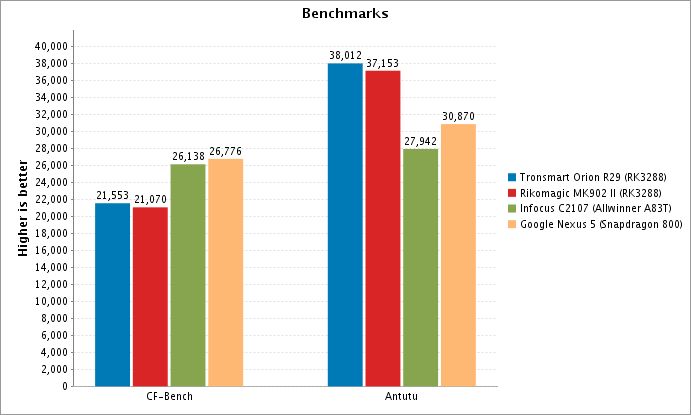 In other words, it’s pretty fast… scoring better than a Google Nexus 5 with a Qualcomm Snapdragon 800 processor in the Antutu benchmark, but scoring a little lower than that smartphone in the CF-Bench test.

The system can handle a pretty good selection of video formats and supports 4K H.265/HEVC video files, as well as 1080p and 720p files. 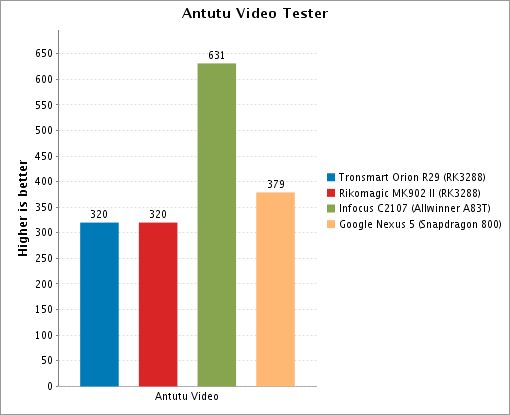 The Orion R28 boots quickly (faster than most smartphones) and generally feels pretty responsive. But when you’re using it with a keyboard and mouse it’s easy to mistake Android for a desktop operating system. It’s not.

For instance, most Android web browsers will identify the Orion R28 as a mobile device which means you’ll see the smartphone or tablet versions of web sites you visit unless you use a browser such as Firefox which lets you request desktop sites. 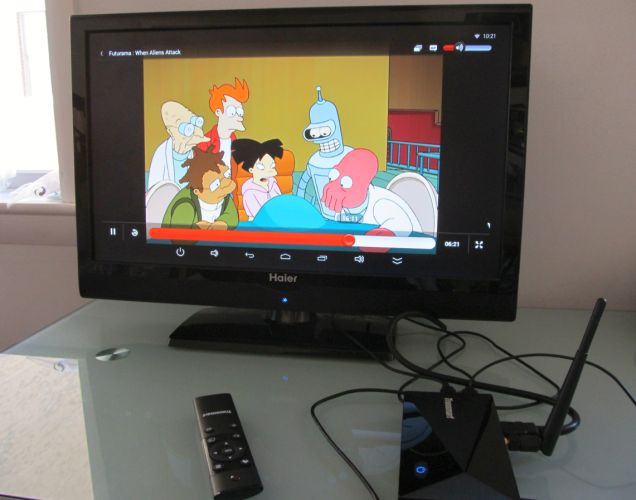 More significantly, right-clicking a mouse button does nothing. You need to long-press to bring up context menus. And hitting enter after typing text in a browser’s location bar doesn’t do anything — you need to hit the Go or next button.

Android was designed to be touched. You can use it with desktop/notebook-like hardware, but the experience can be awkward at times.

That said, Almost anything you can do on an Amazon Fire TV or similar TV box, you can do with a device like the Tronsmart Orion R28. You just end up with a slightly more cumbersome user interface. There are YouTube, Netflix, and Hulu Plus apps. And the Orion R28 also comes with XBMC/Kodi media center pre-loaded. 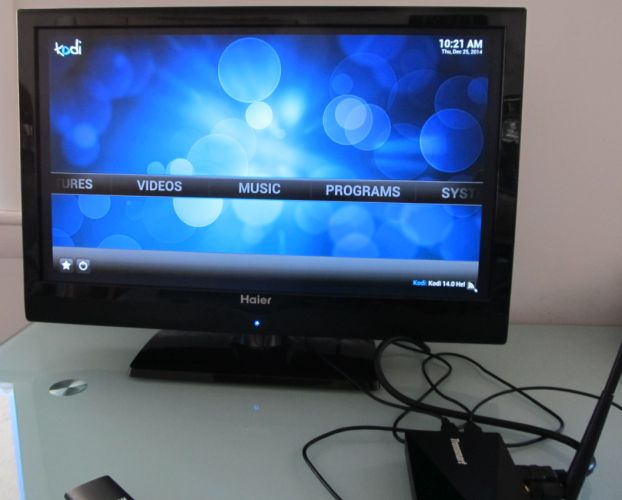 What makes this device different from a Nexus Player or Fire TV though, is that in addition to speedy hardware and a decent range of ports, you also get the ability to run just about any Android app you’d like without rooting your device or installing custom firmware. 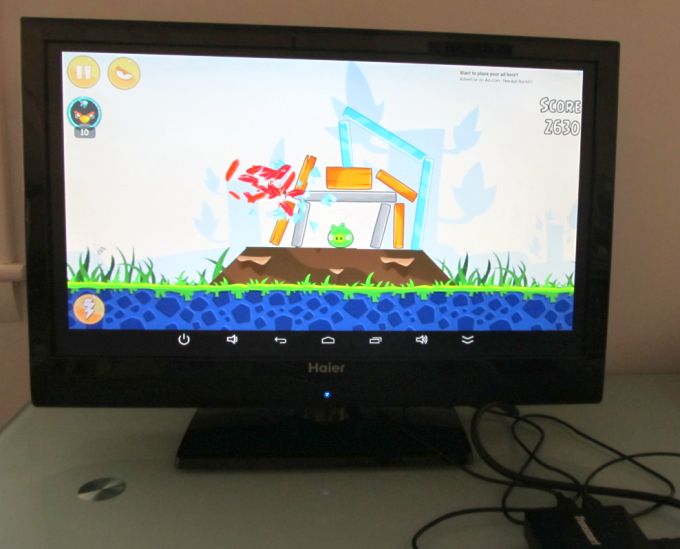 The Tronsmart Orion R28 does come pre-rooted though, which allows you to run apps such as Titanium Backup or Root Explorer that do require root access.

And if you’re not happy with the software that comes with the device, you can search for a firmware update using the built-in system update tool, find manual downloads at the Tronsmart forum, or search for custom ROMs such as Leolas ROM.

Tronsmart’s TV box doesn’t include a custom, TV-friendly app launcher like some devices in this category. It has a home screen that looks pretty much like what you’d see on a tablet.

The device does have a few apps pre-loaded. In addition to XBMC and SuperSU, it comes with a file explorer, APK installer, and media center app called eHomeMediaCenter. It also has an Apps app… which looks a bit like a launcher, but it basically just shows larger icons for all the apps you can already launch from your app drawer. 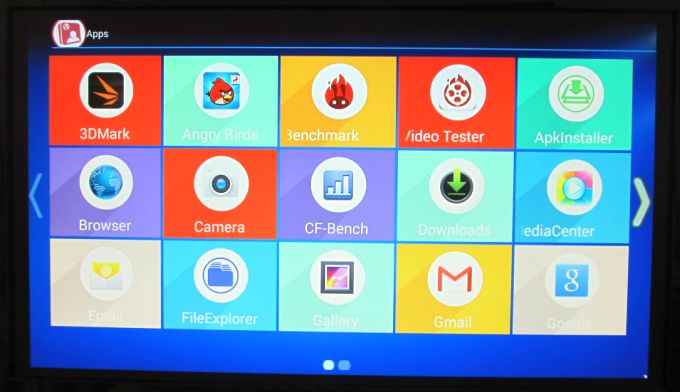 One thing I should note is that when I first started testing the Tronsmart R28 it had a hard time staying connected to a 5 GHz WiFi network, but had no problems with a 2.4 GHz signal broadcast from the same router. After trying to connect a few more times, it eventually latched onto the signal for my 802.11ac network and download speeds picked up dramatically.

A few days later, I’ve had no more problems connecting to the 5 GHz signal, so I don’t know why I was having problems at first. But I’m not the only person who’s noticed the Orion R28 seems to have weak performance with WiFi signals, in spite of its external antenna.

I’ve said this a number of times about TV boxes with Android software, but if you’re looking for a simple, easy-to-use device that lets you stream content from YouTube, Netflix, and other online video sites then you should probably get a simpler (and maybe cheaper) device like a Roku, Chromecast, or Amazon Fire TV.

But that’s not to say that the Tronsmart Orion R28 isn’t worth considering if you want a device that does more than those TV boxes. It’s priced comparably to a Fire TV, Apple TV, or Google Nexus Player. But it has more USB ports than any of those devices. It also features plenty of connectivity options including WiFi, Bluetooth, and Ethernet as well as HDMI, AV, and S/PDIF. 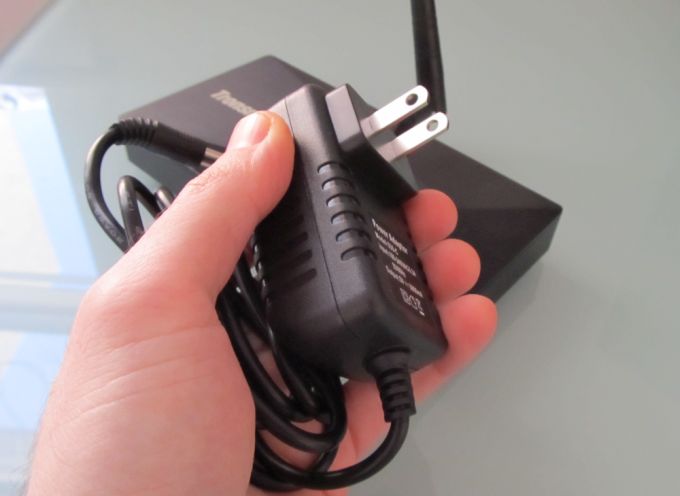 Most importantly, it runs the full version of Google Android. Whether that’s an advantage or disadvantage depends on what you want to do with the device. 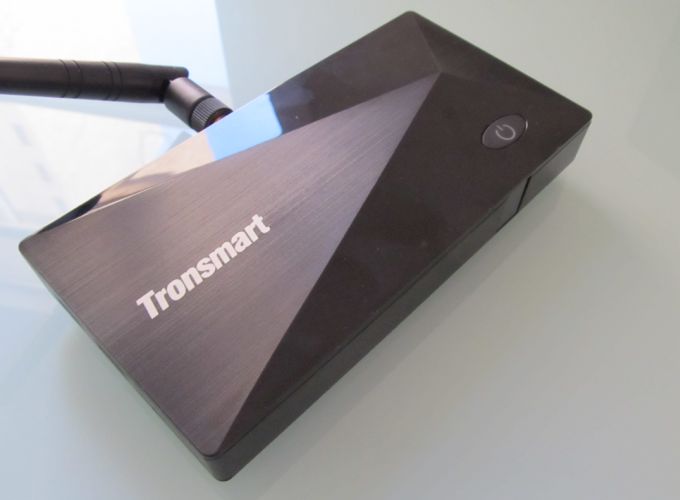 But you can connect a gamepad to the Orion R28 and play video games which might not normally be available for devices that are marketed as media players. You can open a web browser and access content that wouldn’t normally be available. Heck, you could install office software and try to get some work done on this device.

Given those possibilities, the Tronsmart Orion R28 is a powerful, versatile device… that just happens not to be the best option if all you want is a video player.

Thanks again to Geekbuying for providing us with an Orion R28 review unit.