Google Glass-style smart glass products may not exactly be mainstream yet. But Google’s not the only company working on wearable, head-up displays. Lenovo, Toshiba, and Sony, all have their own models under development.

Now Sony is unveiling a new product that’s designed to turn a normal pair of glasses into a smartglass product. 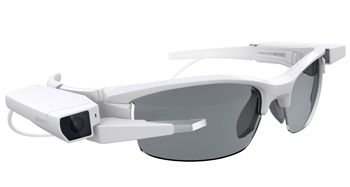 The new Sony Single-Lens Display Module can be attached to sunglasses, prescription glasses, or whatever pair of fashionable specs you already have — so you don’t need to buy a new pair of glasses.

The system basically just uses your glasses as a frame that holds the lens and other components in place, but Sony says it”s compact and light enough to be used with ordinary frames.

Sony’s lens is a 640 x 400 pixel color OLED display that measures 0.23 inches diagonally. It float over one eye to let you view notifications or other graphics superimposed on whatever you’re seeing in the real world.

The company figures this can be used in sports, entertainment, or work environments where software can give you information-at-a-glance.

Sony’s module features an ARM Cortex-A7 processor, 802.11b/g/n WiFi, Bluetooth 3.0, and a 400 mAh battery. It also has a touch sensor, accelerator, and compass which you can use to interact with the device.

Sony plans to offer an SDK that helps developers create third-party apps for the module.